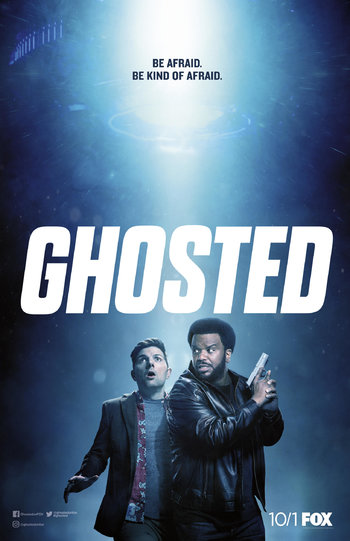 Ghosted is a Fox paranormal comedy series starring Adam Scott and Craig Robinson. Its pilot episode was made available for preview on Twitter one week ahead of its broadcast debut on October 1, 2017.

Leroy Wright, a disgraced cop, and Max Jennifer, a disgraced university professor, find themselves drugged, kidnapped, and forcibly recruited by the Bureau Underground: a top secret government organization tasked with investigating the paranormal. Not being given much of a choice, they join the organization and begin investigating a series of mysterious events that are somehow linked to the disappearance of another Bureau agent.

After nine episodes of middling-to-low ratings, Ghosted was pulled from FOX's lineup in January, and it returned in a retooled format in June. The focus turned to the workplace interactions between the characters (instead of, you know, actual paranormal investigating), and the new storyline of finding out who bugged their office. The retool didn't work, and Ghosted's cancellation was announced on June 28, 2018 with 3 episodes left to air, included an episode that was scheduled for January but pulled when the retool was announced. After a week where it was assumed the network was going to discard the un-aired episodes, it was decided that they should air; the series finale aired July 22.