Series / The Other Two 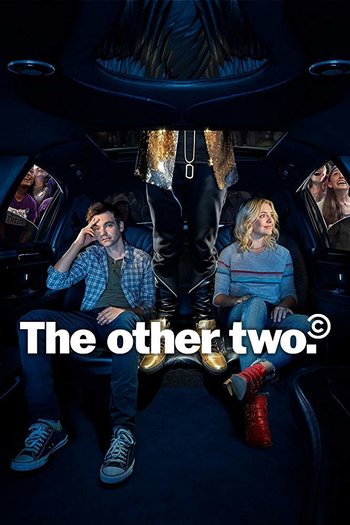 The Other Two is a single-camera sitcom created by former Saturday Night Live head writers Chris Kelley & Sarah Schneider and produced by Lorne Michaels. It originally aired on Comedy Central before moving to HBO Max starting with season two.

It follows struggling twenty/thirty-something siblings Cary (Drew Tarver), a struggling actor, and Brooke (Heléne York), a former dancer, after their 13-year-old brother Chase (Case Walker) becomes a viral teen idol known as ChaseDreams. Although supportive, they find themselves struggling to reconcile Chase's sudden fame amid their own problems: Cary grappling with how to succeed in the entertainment industry without compromising his homosexuality, and Brooke trying to figure out what her next move should be after quitting her latest dead-end job and breaking off a longterm relationship. Complicating matters further is the unexpected arrival of Chase in Manhattan with their mother Pat (Molly Shannon) and his new agent Streeter (Ken Marino) to manage his burgeoning career. Also appearing in the series are Josh Segarra as Lance, Brooke's ex-boyfriend, and Wanda Sykes as Shuli, an executive at Chase's record label.

The show explores the anxieties and ambitions of aging millennials while spoofing the culture around internet celebrity, especially Youtubers and influencers. It also features plentiful celebrity cameos such as Patrick Wilson, Andy Cohen, and Michael Che as themselves.