Series / The Opposition with Jordan Klepper 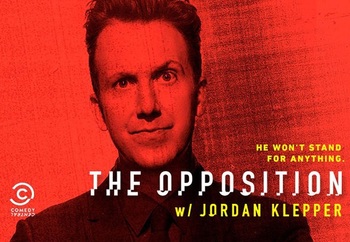 "I'm not going to lie to you. I'm not some guy in a suit who's gonna butter you up, pat you on the head, and tell you you're smart. No, you're too smart for that."
— Jordan Klepper
Advertisement:

Effectively a Spiritual Successor to The Colbert Report, the show is a parody of Alex Jones and the general trend of "Alt-Right" media commentators, havng a greater focus on wacky correspondents. Notably, the show managed to attract Jones' ire before it even premiered. This did not go unacknowledged.

On June 15, 2018, Comedy Central announced that the show had been cancelled, but that Klepper would be hosting a new primetime weekly show. Said show, Klepper, which aired in 2019, ended up being a mini-docuseries however, and Klepper returned to The Daily Show later that year.

The Opposition with Jordan Klepper contains examples of: