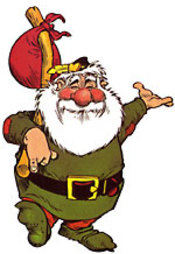 Dutch comic series which was originally serialised in the Donald Duck magazine. It was written by Thom Roep and drawn by Piet Wijn. It ran from 1975 until 2001.
Advertisement:

Douwe Dabbert is an old drifter who walks the earth. He owns a magical knapsack, which provides him with everything he needs in emergencies. Amazingly, while this is often used to get him out of sticky situations, it almost never becomes a Deus ex Machina; Douwe has to use his wits to bring the adventure to an end. Originally, his adventures took place in medieval kingdoms which never existed, but later the story moved to seventeenth century Holland, a period known as Holland's golden age. The writers also found ways to send Douwe to the Caribbean, Africa, Russia, Japan, North America, the Middle East and the arctic.

Most of Douwe's adventures are stand-alone. However, there are few recurring characters. Douwe has faced the villainous Ludo Lafhart and his henchman Knudde three times and the evil witch Wredulia two times. He has also befriended a family of wizards, who appear in seven of his stories.

The comics have been published in Dutch, Danish (as "Gammelpot") and German ("Timpe Tampert"). Indonesian kids born in the eighties would also be familiar with him as "Pak Janggut" ("Mr./Old Man Beard"), although it's really only that particular generation that would be familiar with him. For some reason, despite his popularity in that time, there are no reprints of any of the albums. A few issues have been translated into Spanish and one album was even published in Saudi Arabia, but for some reason there is no English version.

A complete list of albums can be found below the tropes.