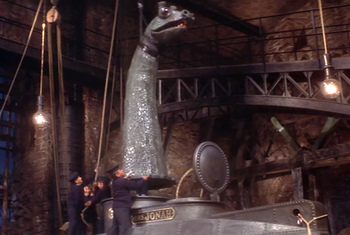 Some assembly required.
So the story takes us to a certain lake in Scotland, and our adventurers/detectives/four meddling kids and an animal find themselves investigating the legendary Loch Ness Monster. Frightening, water bound and usually fog-shrouded encounters with that legendary beastie follow, and at the denouement we find the mystery solved!
Advertisement:

It wasn't a lake monster at all, but a disguised submarine.

We don't see this trope much today, but a submarine masquerading as Nessie to scare people away is the solution offered in a number of older films that feature that world famous lake monster. Variations include robot Nessies, paper mache monsters, and other counterfeits but the most often encountered version is a submersible ship, with a gargoyle head attached to give that scary sea serpent effect.

In these instances, the writers and producers were sheepish about introducing a real Loch Ness Monster into the world of the film. A a sub with a monster head riveted onto it is the default answer to the enigma of Loch Ness might seem cheesy. It is a handy way to write off a Special Effects Failure, when it turns out it was SUPPOSED to be fake all along.

There are two sources of this trope: the most well-known fake Nessie photo in history was, in fact, a toy submarine with a monster head; the other that the Nautilus from 20,000 Leagues Under the Sea, was initially misidentified as a sea monster.

This is a sub-trope of the "Scooby-Doo" Hoax; the specific solution of a strangely-decorated submarine sets it off as a variant peculiar to that highland lake monster.

Also expect the real Nessie to show up at the end, when nobody's looking.