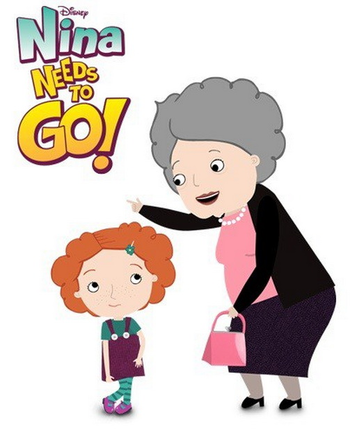 Nina Needs to Go! is a Disney Junior short series in which each episode has Nina have a Potty Emergency and must be taken to the bathroom by her ninja grandmother.

Common gags include surprised onlookers, over-the-top ways of taking a child to the bathroom (like riding elephants, riding on a wrecking ball and more) and Nana's many sci-fi gadgets including her umbrella, which whenever it does something, Nana states it as the reason why she always carries it.

Episodes generally start with Nina and her family on an outing and one of Nina's family (her mother, father or older brother Frank) asking Nina if she has to go to the bathroom, to which Nina responds "No, I'm fine." However, she will soon start to develop a need to pee, usually triggered by hearing, seeing or even imagining running water.

The rest of the family will try unsuccessfully to bring Nina to a bathroom and then Nana will pop out, usually saying, "Hello, darlings", to which Nina and possibly Frank will say her name. Cue the wacky hijinks!

At the end of each episode, Nina successfully goes to the bathroom and states "That'll never happen again, because now I know, don't wait to go", which is a rather perplexing catchphrase due to the fact that a) it always happens again and b) she never was "waiting" to go. She just genuinely thought she didn't need to.

After two seasons off all that, the third season finally changed things up, with similar insane adventures lead Nina to learn lessons about how to act appropriately in certain places instead. However, "Museum" follows the old format since it was a leftover episode from the second season of the show.

"That will never happen again, because now I know-don't wait to go!"

We never find out what the fictional knight really cried out, but what Nina says completes the sentence well.

We never find out what the fictional knight really cried out, but what Nina says completes the sentence well.