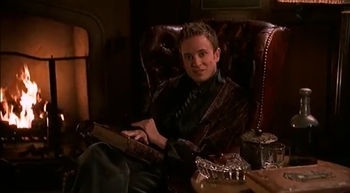 Andrew imagines that he is situated in an old library with a roaring fire, dressed in a smoking jacket and holding a pipe, describing his own version of "Buffy, Slayer of the Vampyrs". Instead, he's taking refuge in the bathroom talking to a video camera, and his dramatic narrative is cut short when Anya knocks on the bathroom door. He tries to explain his actions, and Anya reminds him of Buffy's irritated reaction the previous night, when he had followed her on patrol. He explains his desire to make a record of the events leading up to the apocalypse, in case humans survive, so that they will know what Buffy and her allies did.

Later, Andrew talks to the video camera and uses his big white board to illustrate and explain the array of evil forces in Sunnydale. He continues to interview the residents of the house, starting with the Potential Slayers. He introduces a romanticized version of everyone to the camera, a fantasy in which Buffy seductively pours cereal, Spike appears without a shirt, and Anya eats from a bunch of grapes. Buffy reiterates her irritation with Andrew's behavior. As she describes her vision of vampire armies to her friends, Andrew sneaks away to continues his narrative, describing an idyllic scene of himself as leader of the Trio. As Buffy continues to talk, Andrew observes Willow and Kennedy and recounts his encounter with Dark Willow. Altering the past, Andrew imagines himself standing up to Dark Willow and deflecting her power while Jonathan meekly hides behind him.

Buffy arrives at the school to find two boys fighting, a shy girl turning invisible because nobody notices her, and various other disturbances. Buffy finds Principal Wood, who has just been injured by a thrown rock. As she bandages his head, they discuss the bizarre (yet familiar) chaos dominating the school. She explains her suspicions that the activation of the Seal of Danzalthar is behind the morning's chaos. They investigate the newly-uncovered seal in the school basement. As Robin gets close to the seal, he is infused with evil. In a demonic voice, he berates Buffy for her involvement with Spike. The connection is broken when Buffy pulls him away from the seal, leaving Robin with no memory of the possession.

Meanwhile, at the Summers' home, Andrew films Dawn, then praises Xander's expert repairs to the windows (ignoring Willow and Kennedy, who are kissing in the living room). He re-interviews Xander and Anya, prying into their feelings about their ruined wedding. Afterward, the two to talk to each other about what happened and what feelings still exist between them. In the basement, Spike tells Andrew and his camera to get lost; Andrew interrupts with a lighting correction, and Spike (performing for the camera) enthusiastically repeats his verbal assault. Upstairs, Xander and Anya discuss their love for each other; they are recorded by a hidden camera, which Andrew reviews later. When Buffy and Robin arrive, they inform Andrew that he is going to help them deal with the Seal (which, at this point, is surrounded by five possessed students and glowing with light).

The gang drills Andrew for information about the seal and tries to force out his memories with a special charm. He remembers an event from Mexico, where he had fled with Jonathan the year before. In his memory, he and Jonathan suddenly wake from the same nightmare, both haunted by their evil pasts. After Jonathan leaves the room, the First appears to Andrew in Warren's form, questioning his progress in obtaining the knife necessary to sacrifice Jonathan. In the present, Willow asks Andrew where that knife is now (Buffy's silverware drawer). The knife is engraved with a language that is tied to the seal, and Willow begins to research.

Buffy tells Andrew that she believes that he can help her quiet the Seal. They leave for the school, accompanied by Spike and Robin. They arrive to find that the school is being destroyed by ongoing student riots. Andrew tries to film their walk through the halls, but they are attacked by several strong students. Buffy and Andrew make their way to the basement while Spike and Robin guard the stairway entrance. As they walk, Andrew tells Buffy about what happened when he killed Jonathan. In this version, however, he refuses to do the deed when goaded by the First in the form of Warren, and when Jonathan sees the knife he attacks Andrew who accidental stabs him, followed by Andrew dramatically screaming for his fallen friend. When Buffy mentions Wood's earlier possession, Andrew instantly changes his story so that he stabbed Jonathan while under the seal's thrall. They enter the basement room carefully and find five students standing around the seal, their eyes freshly cut and sealed (like Harbingers of Death). In the Summers' basement, Xander and Anya revel in the aftermath of having sex again before talking about moving on with their lives (a conversation that fades into an awkward silence).

At the school, Spike and Robin are attacked by more students. Spike inadvertently confirms his role in the murder of Robin's mother, and Robin makes a failed attempt to stake Spike; in the chaos of the fight, his actions go unnoticed. Buffy battles the new Bringers while Andrew records the scene with his camera. Once she has killed the Bringers, Buffy pulls out the knife and advances on Andrew, revealing that they must spill his blood to quiet the Seal, since he was the one who initially activated it. Buffy describes the bitter prospects for their future, and chastises his constant attempts to avoid taking responsibility for his actions. Andrew, frightened to tears, admits how he willingly murdered Jonathan despite knowing deep down that he wasn't really dealing with Warren, and how he is sorry. He tells Buffy that he deserves whatever happens to him. Buffy leans Andrew over the Seal so that his tears fall on its surface. The Seal closes and becomes quiet. Buffy reveals to Andrew that tears, not blood, were necessary to close the seal; she had no plans to kill him. The students around the school are released, and the violence stops.

Later, a sad Andrew talks to the camera in the bathroom again, confessing that he probably will die, and that he deserves to. He shuts the camera off.