Recap / Buffy the Vampire Slayer S1E11 "Out of Mind, Out of Sight"

"I can be surrounded by people and be completely alone. It’s not like any of them really know me. I don’t even know if they like me half the time. People just want to be in a popular zone. Sometimes when I talk, everyone’s so busy agreeing with me, they don’t hear a word I say."
—Cordelia Chase 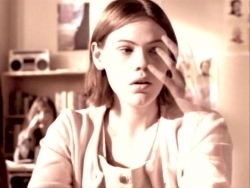 Cordelia is excitedly talking to Harmony and her friends about the spring and May Queen competition when Buffy bumps into them, spilling various slayer paraphernalia on the floor. She makes the excuse that Giles has lent them to her for a history project.

In English class, Cordelia comments that in The Merchant of Venice, Shylock is self-involved and whiny. She likens it to a bicycle rider she ran over; the girl whined about her pain and ignored Cordelia's traumatic experience. The teacher appears to agree with the viewpoint. After class, Cordelia arranges to talk to the teacher the next day about her paper.

In the boys' locker room, Mitch Fargo, Cordelia's boyfriend, is attacked by a floating baseball bat. Cordelia is outside campaigning for May Queen. As Xander and Willow mock Cordelia, Buffy feels left out and explains to them that she was the May Queen at her old school. The conversation ends when it's discovered that Mitch has been beaten up. Principal Snyder arrives, confirming Mitch isn't dead. Before Mitch is taken to the hospital, he explains what happened but refuses to let Buffy into the crime scene. Willow and Xander distract him, allowing Buffy to slip into the locker room. The word 'look' is spray painted on to the lockers.

At the library, the Scoobies are stumped. They suspect a ghost is behind what is happening. Meanwhile, Harmony asks Cordelia about Mitch's condition to which she replies that his bruises are too bad for them to be photographed at the prom. In a flashback, we see Cordelia and Harmony talking about Mitch's latest break-up with his girlfriend Wendy and whether Cordelia would like to be his girlfriend instead.

In the present day, Harmony is pushed down the stairs by an invisible force and hurts her ankle as Buffy approaches. Buffy follows an invisible being laughing, which causes it to bump into her as it escapes.

Later on, Xander suggests a cloak of invisibility worn by the Greek gods. Buffy dismisses the theory as the crimes being committed are too petty. As the Scoobies disperse, Buffy follows the sound of a flute. In the library, Giles is surprised by Angel who offers to get hold of a book of prophecies, the Pergamum Codex. Another flashback sequence shows Cordelia and Harmony discussing a lecture and ignoring a girl called Marcie. In the present, Cordelia wins the May Queen competition. When looking over Willow's list of missing students, Buffy sees Marcie and suspects her when it says she played the flute. Tracking Marcie, Buffy finds her hideout just as Marcie finds Cordelia's literature teacher. She suffocates her with a plastic bag. Cordelia arrives shortly after and manages to save the teacher. An invisible hand writes the word 'listen' on the blackboard.

As Willow looks over Marcie's yearbook, she sees that all the messages written are generic 'have a nice summer'; a sign that no one knew her. She's horrified to see her own message is exactly the same. Giles realizes that Marcie became invisible because people treated her like she didn't exist. In a flashback, we see a teacher overlook Marcie for the other students when she puts her hand up in class. She looks down, disappointed and realizes she's turning invisible. As the Scoobies realize Marcie is after Cordelia, the latter enters the library and asks Buffy for protection (as only Cordelia can). They decide to use Cordelia as bait and Buffy will act as her bodyguard. As Cordelia is getting dressed, she confides in Buffy that she's lonely too, even though she's the most popular girl in school - all the kids seem to want is to be in the "popular zone." Marcie lures Willow, Xander and Giles into the boiler room where she locks the door and turns the gas on, before grabbing Cordelia. Buffy follows Cordelia and finds her unconscious. Marcie surprises Buffy, kicking her and knocking her out.

Buffy wakes up, tied to a chair next to Cordelia. They see the word 'learn' written on a curtain. Marcie explains that Cordelia is the lesson, or she will be after she plans to make a mockery of Cordelia's face by surgery. Buffy kicks the tray with the surgical tools on and manages to free herself from the ropes. Angel rescues the other Scoobies and turns off the gas. Buffy concentrates, listening for Marcie and knocks her into a curtain before knocking her out. Two FBI agents, who of course aren't exactly forthcoming with the details, arrive to take Marcie away.

Cordelia comes by the next day after the coronation to thank the Scoobies for saving her, much to their surprise. However, her reaction when Mitch arrives shows she's not ready to give up her popularity.

Meanwhile, Marcie is taken to a school full of invisible students by the FBI. She sits down in class and opens her textbook. The title reads 'Assassination and Infiltration'.