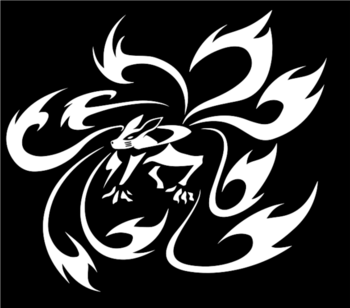 The Mark of the Family
Naruto: You’ve heard the saying behind every great man is a great woman, haven’t you?
Ino: (Nods)
Naruto: Well imagine all that I could do using this jutsu.
Ino: Come on Naruto, you can’t honestly expect to unite all the shinobi’s villages simply by sleeping your way to the top.
Advertisement:

Naruto is given a scroll containing the secrets of making women fall for him, a scroll he uses at first on the women around him but soon on the shinobi world as a whole, giving birth to the Ero-ninja.

Sounds like a typical Harem Genre Naruto fanfic, does it? Well, it is… at first. After the dozen or so chapters, however, the main story kicks in, taking place at the beginning of Shippuden. Naruto’s (ever-expanding) harem is christened as The Family, who go from being love interests into a full-blown balanced Battle Harem, doing whatever they can to help Naruto achieve his mentor Jiraiya’s wish for peace in the shinobi world.

The story (and its many spinoffs) can be found on Ficwad

and was also posted by a third-party on AO3

Has a Wiki found here