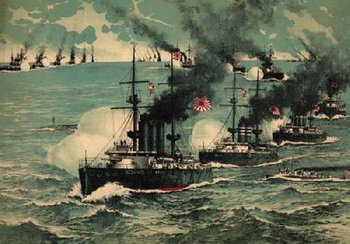 The First Sino-Japanese War (25 July 1894 - 17 April 1895) was fought between Qing Dynasty China and Meiji Japan, primarily over the control of Korea. The war served to demonstrate the success of Japan since the Meiji Restoration as compared with the Self-Strengthening Movement in China, and also highlighted a shift in regional power from China to Japan.

The conflict began as Japan sought to annex Korea to protect it's own interests and prevent another country from doing so first. Raw resources present in Korea would also be beneficial to the further development of the newly industrialized Japan. On February 27, 1876, Japan imposed the Treaty of Ganghwa on Korea, forcing Korea to open itself to Japanese and foreign trade and to proclaim its independence from China in its foreign relations. Opinion in Korea was split, with relatively equal support towards being subservient to China or Japan.

Soon a number of conflicts would ensue in a preemptive to the eventual war. These included the Imo Incident where severe food shortages and debt in Korea led to rioting and a small military mutiny. In 1884 the Gapsin Coup would occur, when a group of pro-Japanese reformers briefly overthrew the pro-Chinese conservative Korean government in a bloody coup d'état, which was then countered by a Chinese backed pro-Chinese coup d'état with similarly bloody results. The resulting Chinese-Japanese tensions were mitigated by the Convention of Tientsin in 1885. Finally, the Chinese government informed the Japanese government of its decision to send troops to the Korean peninsula in accordance with the Convention of Tientsin, to aid Korea with the issue of the Tonghak Rebellion. Japan took affront to this and in return moved on Korea, displacing the current government with pro-Japanese legislators and ordering the already retreating Chinese forces out of the country.

Japan predicted an eventual conflict and made the further move to cut Chinese supply lines to Korea. Chinese and Japanese ships reached the point of combat in the Bay of Asan, resulting in the Battle of Pungdo and the sinking of the Kow-shing, a British steamer leased by China to transport troops and war material to Korea. Incidentally, the captain of the Japanese warship that sank the Kow-shing was Heihachiro Togonote Later the commanding Admiral who defeated the Russian fleet in the Russo-Japanese War who impressed the British with his acute awareness of the international law and political acumen when the ship's owners sought to challenge Japan's decision to sink the steamer. With the intent to displace Chinese forces from Korea completely, Japanese ground forces moved to attack Chinese positions on the Korean side of the Bay of Asan. The Japanese succeeded in routing the Chinese forces at both the Battle of Seonghwan and the Battle of Pyongyang, more or less removing all Chinese presence in mainland Korea.

Japan continued their aggressive offensive with the Battle of the Yalu River (1894), where they sunk 8 Chinese fighting ships while taking no losses, although the two modern German-built Chinese battleships remained virtually impervious to Japanese gunfire and would have done quite a bit more damage if it weren't for horrendous shell quality and the act of sabotage by the flagship's own captain, which led to the admiral commanding the fleet and most of his staff incapacitated. The fact that the Chinese ships were allegedly overpainted with lacquer and paint didn't help, and it even helped to destroy the Chinese ships even more quickly. Following their loss of the ground battles in Korea Chinese forces retreated to Manchuria, with the Japanese following. Here the Chinese lost yet another conflict with Battle of Jiuliangcheng, and the Japanese tracked them to Lüshunkou (Port Arthur) where after the Battle of Lushunkou they indulged in the Port Arthur Massacre, slaying thousands of Chinese civilians.

The Japanese would completely destroy the Chinese presence in Korea as they followed up their latest victory with another at the Battle of Weihaiwei. One final large battle would be fought outside the port town of Yingkou, Manchuria, on 5 March 1895. Unsatisfied with the little resistance they faced the Japanese would move forward with the Pescadores Campaign, involving the more or less bloodless attack on Pescadores Islands off the west coast of Taiwan, the Japanese established a position that would force the resulting Treaty of Shimonoseki in April 1895.

The Treaty of Shimonoseki was signed on 17 April 1895. China recognized the total independence of Korea and ceded the Liaodong Peninsula (in the south of the present day Liaoning Province), Taiwan and the Penghu Islands to Japan "in perpetuity". Additionally, China was to pay Japan 200 million Kuping taels as reparation. China also signed a commercial treaty permitting Japanese ships to operate on the Yangtze River, to operate manufacturing factories in treaty ports and to open four more ports to foreign trade - an important milestone in Chinese economic development, as it marked the start of China's industrialisation-in-earnest as various corporations set up manufacturing plants in the foreign-concessions. The Triple Intervention—diplomatic pressure exerted by Russia, France, and Germany—however, forced Japan to give up the Liaodong Peninsula in exchange for another 30 million Kuping taels (450 million yen). Incidentally, Lüshunkou, with its modern naval base, was taken over by the Russians after being returned from Japan, for a term of 99-years. It would serve as the principal naval base of the Russians in the upcoming Russo-Japanese War.

The war served to best demonstrate the power of the up and coming semi-industrialised Japan and its modernised army and navy based heavily on German and British lines respectively, as well as the serious deficiencies in the modernisation of the Empire of the Qing's military forces - which, despite being larger and having been issued superior weaponry, ships, and equipment (well, not quite, the flagship had a flawed design) lacked adequate command and logistics staff because the Qing hadn't based their armed forces on any one particular European model (inclusive of the General Staff/General HQ concept, which the Japanese took from the Germans). The Qing also hadn't liaised as closely with foreign military organisations as the Japanese had, meaning their officers and technical specialists hadn't picked up the same skills or experience as their IJA and IJN counterparts. Paradoxically, in this day and age pursuit of a better-run logistics and command organisations was something only attempted by powers which didn't have the resources to match their opponents - Germany, which was surrounded by potential and very powerful enemies, being the perennial example. As it turned out, the 'strategy of limited resources'note  In team-sport terms, working on your planning and team-work so that you can go toe-to-toe with a team bigger and stronger, etcetc, than yours is pursued by Germany and Japan would later enable them both to punch 'above their weight' when fighting much more powerful foes like Russia.

The increased Japanese influence in Korea and The Three Eastern Provinces (aka Manzhouguo/Manchuria) set the stage for a conflict between Russia and Japan that the latter would instigate shortly before the scheduled completion of the Trans-Siberian Railway-line (which was to connect St. Petersburg to Russian Lüshunkou and Vladivostok).