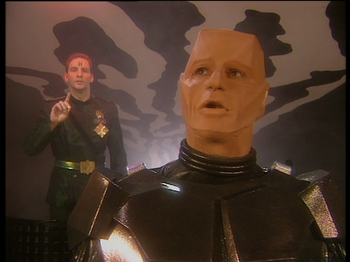 A man of such awesome stupidity, he even objects to his own defence counsel.
Advertisement:

Kryten enters the medical deck, bringing attention and breakfast to Lister, who is laid up with yet another bizarre future-illness. In this case, Space Mumps, a disease that causes his head to swell up with grotesque pustulent blisters and growths. Lister thanks Kryten for his care, lamenting at the absence of Rimmer and Cat. Kryten explains that both of them have had other things on their mind; Rimmer has just returned from a ten-day hike through the engine deck with some of the skutters and is even now loading up the slide projector with pictures from his trip (something that Lister reacts to with horror), while Cat has been distracted by the escape pod containing what evidence suggests is a woman that they just picked up.

Naturally, Lister immediately goes to investigate the pod, where he shares some banter with Cat before they realise the pod's stasis release process hasn't been activated and switch it on. Rimmer and Kryten arrive too late to stop them, with Rimmer explaining that the release was left off on purpose because, according to the black box, the pod came from a prison ship that was the scene of a riot that left only two survivors; a guard and a prisoner. Thus, there's a 50% chance the person inside the pod is not the female guard Barbara Bellini, but instead the surviving prisoner. Once they learn that the prison ship was carrying a cargo of 40 Simulants — psychotic, kill-crazed combat droids — Lister and Cat are forced to agree that finding some way to identify who was in there first would have been better.

With no way to stop the release, or to identify who's inside, as well as being unwilling to risk murdering an innocent woman should it be Barbara inside, they hit upon the plan of going to the penal colony station where the original prison ship was heading; that way, if it is a simulant in the pod, they can trap him there and leave.

The penal colony, Justice World, is still functioning, despite its age, and the group board with no problems. While the initial mind probe to detect crimes scares Lister, he gets through without a problem. Unfortunately for Rimmer, the Justice World computer declares he is guilty of 1167 counts of 2nd-degree murder, courtesy of causing the radiation leak that wiped out the crew of Red Dwarf. And in the light of him being a hologram, each murder piles up with a minimum of eight years each, to be served consecutively, making a total sentence of 9328 years incarceration.

Kryten, however, manages to convince the Justice Computer to give Rimmer a retrial. There, he presents an eloquent defense for Rimmer that ultimately convinces the computer that Rimmer is not guilty of the crime by virtue of being A: so egotistical that he would blame himself for the accident despite the fact he was nowhere near important enough to be held guilty, and/or B: so incompetent that the real blame lies with whoever was stupid enough to appoint him to such a vital task in the first place.

Unfortunately, the trial took so long that the pod has opened by the time the crew get back to it — and the contents are one angry simulant. The Dwarfers flee into the Justice Zone section of the colony, the simulant close on their heels. While Lister manages to sneak up on the simulant, the droid's pleas that he is willing to talk (and Lister's own disgust at both the idea of shooting him in the back and Rimmer's eagerness to do so) persuade him to go and talk to the cybernetic killer.

Unfortunately, the droid was lying and attacks Lister with a concealed pistol and knife. Unfortunately for the simulant, the Justice Zone's effects mean that it is he who takes the damage; realizing this, Lister gets the simulant to smash himself repeatedly in the head and then strangle himself into submission.

Once the simulant is dealt with, the Dwarfers fly away while Lister starts passionately ranting about the nature of justice and free will to his fellows. Who promptly watch in dispassion as he falls down an open hatch before sealing it up and leaving him.