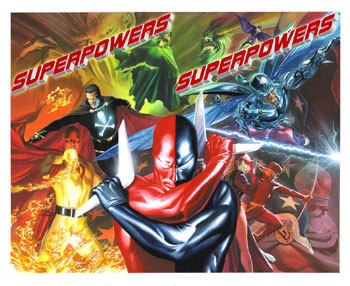 Public Domain Characters galore! A couple dozen Golden Age super heroes are thrown together in one continuity as planned by Alex Ross, renowned fan of The Golden Age of Comic Books and comicbook artist.

The story goes that, back in World War II, the American government got Fighting Yank, a Super Hero with Charles Atlas Superpower, the ghost of his great-grandfather who gives him advice and a magic cloak, to retrieve Pandora's Urn from Nazi clutches. The mythology of Pandora's Urn goes that when she opened it, all the horror and evil in the world was released from it, but also "hope".

Fighting Yank's great-grandfather's ghost believes that if all the other super heroes currently fighting along side the American Army against the Axis were to be sucked into the Urn, them theoretically being "hope", then all the evil would go away too.

The other heroes, such as the Green Lama, the Flame and Death Defying 'Devil (the Golden Age Daredevil), weren't too keen on the idea but Yank kept on with his great-grandfather's plan and secretly captured all the heroes, one by one, in the urn after the war.

Over sixty years later, racked by guilt, Yank is visited by the American Spirit, a spectral flag, apparently made of the blood of patriots, who tells Yank that the world is worse off without the heroes that the Yank had captured in the Urn and that Yank only had a short time to live. Against his Great-Grandfather's wishes, Fighting Yank decides to don his magic cloak once again and follow the America Spirit.

In 2015, a...sequel? Successor? Prequel? ...series called Blackcross ("From the Pages of Project Superpowers") written by Warren Ellis was published that sees the American Spirit stalking across a different, more familiar Earth attempting to prevent the heroes from crossing over into this world. As this is a book written by Warren Ellis, this plan involves brutally murdering the heroes' counterparts on this Earth, and isn't completely successful. As of issue 5, it's been revealed the new book takes place before the previous series, as the heroes are explicitly trying to escape from Pandora's Urn in it, but how (or even if) this effects the events of the original Project Superpowers hasn't been revealed yet.

In 2017, another series "from the pages of Project Superpowers" debuted - Hero Killers. In this series, which appears to take place in a different continuity, all the heroes relocated to a small town, where they now hunt supervillains for bounties. When Tim Terror, Sparky, and Captain Battle, Jr. get tired of their respective mentors hogging all the glory, they decide to strike out on their own.

In 2018, the original Project Superpowers franchise was revived with a new series, Volume 2.