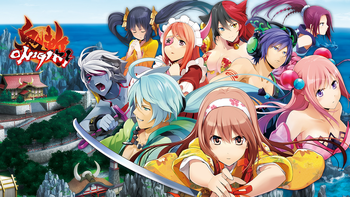 Onigiri is a Japanese MMORPG created by Cyberstep. It was launched in the summer of 2014 and has a decent sized player base. Around 2015 the game got a PS4 and XBox One release as well, having their own servers.

In late 2021, a mobile phone version running on Android and IOS has been released under the name Onigiri Heroes. It's basically the same game, with few but significant modifications to the gameplay.

Long ago in Japan, malicious creatures known as the Kamikui appeared, causing all sorts of destruction all over. After a century of problems that beset both man and god, Amaterasu managed to place three great seals that locked these vicious monsters away.

Years later, the seals have somehow broken and the Kamikui have been appearing all over Japan. It falls to a young oni and their friends to save Japan from breaking out into all-out chaos, or something even worse.

Not to be mistaken for the Japanese rice ball.

Onigiri provides examples of these tropes: