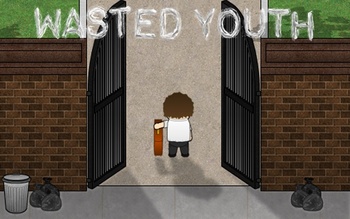 Wasted Youth is, for lack of a better description, Bully as a Flash game. It is being made in two parts; Part 1 can be played here

, while Part 2 is currently in development.

You play as an unnamed British teen boy who is sent to St. Frost Academy, a boarding school for Britain's slackers, troublemakers and idiots, after getting expelled from his last school. You meet your new classmates, perform odd jobs for them, go to class (or not), and make friends and enemies in your first few days at school. Before long, however, students start disappearing from the campus...