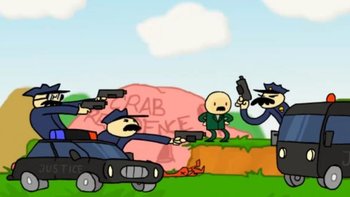 The Visit is a video game created by Molkman and Majus Arts for Kongregate and Newgrounds in 2012. In it, you play as a nameless man who has to get to his ladyfriend while avoiding crabs.

The game's rather short, so before reading the trope list, it's recommended to play it here