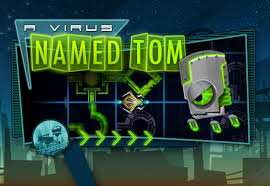 Well, I have one last invention for them. I know they'll LOVE him. I call him... Tom.

A Virus Named TOM is a Action-Puzzle game developed by Misfits Attic, and released for PC on August 1, 2012. It also received a Play Station Vita release on April 5, 2016 as part of the Instant Game Collection for the Play Station Plus.

The game revolves around the titular TOM, who is a virus created by the nefarious Dr.X to infect various machines.