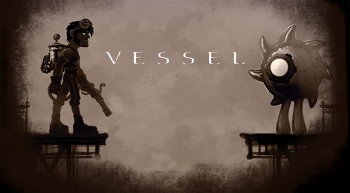 Some people want to help the world with their genius, others do it for the science. Yet when your invention runs rampant, who comes in to clean up the mess? That's your own damn job.

Vessel is a physics based Puzzle Platformer by Strange Loop Games. You are M. Arkwright, the mind behind the Fluro, a device that gives shape, life, and a very simple intelligence to water. Use of these watery automatons has revolutionized industry in Arkwright's Steampunk world. Of course, if you have such ambitious projects you require a massive laboratory. Fluros are subservient to whoever plants their 'seed' and Arkwright's inventions are all he needs to keep his equipment in peak condition. However, as his research into his next project continues to evolve, so do his inventions. The so-thought docile Fluros have taken to their work a little too well and multiple forms have been sighted making more fluros and wreaking havoc in the lab's machinery, as well as the nearby factory, orchard, and mines. Problem is, Arkwright only created one kind of Fluro...

Perhaps curiosity got the better of Arkwright as he goes to investigate the disturbances.