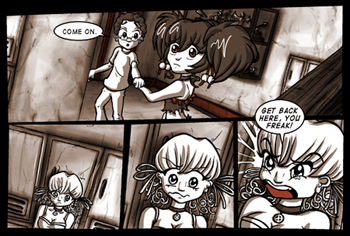 An extract from page 28
Advertisement:

is a graphic novel about a turning point in a young vampire girl's life.

In the 1950's, Anny Vermont was a happy, friendly, popular teenager without a care in the world. That was until one fateful night when she was (Yep, you guessed it) bitten by a vampire, and her life was changed forever.

Anny hated becoming a vampire so much that she took the first opportunity that arose to return to high school. Unfortunately, this break didn't arrive until a good 60 years later, by which time Anny had picked up her fair share of eccentricities and a deep obsession with rock music.

The first Annyseed adventure, The Blood of Another, takes place over the first five days of her return to high school. There she meets a kind hearted otaku called Winston, a misunderstood bully named Charlotte, and a seemingly paedophilic substitute teacher called Mr. Coldsteem, who appears to be obsessed with Anny.

Anny and her new friend, Winston, decide that they need to somehow divert Coldsteem's attention from her, without drawing it towards her vampiricisms. (So telling the faculty is not an option.) However, the powers of a forest witch just might be what they are after. Their travels lead them through old, steam punk mansions, swamp dragon caves, and a bizarre witch herb garden. Little do they realize, that a much more dangerous nemesis is in high pursuit of our heroine.