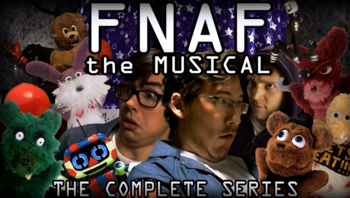 Five Nights at Freddy's: The Musical is a series of web videos by Random Encounters chronicling the adventures of Markiplier and NateWantsToBattle as they work the night shift at Freddy Fazbear's.

So far five nights have been posted separately, with a "Complete Edition" having been released July 30, 2016.

" and its later remake, "Out for Blood (Blood and Tears Remix)

Tropes applying to Five Nights at Freddy's the Musical go below.

This web video series has examples of: