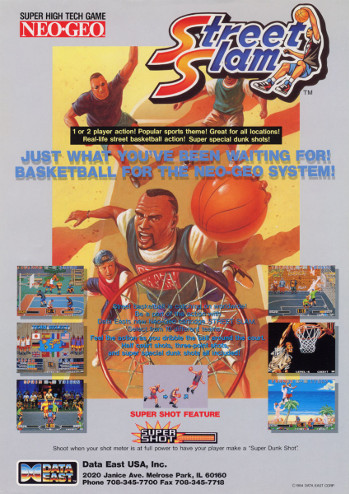 .
Street Slam (known as Dunk Dream in Japan, and Street Hoop in Europe) is Data East's 1994 sports game for Neo Geo. The game was created in wake of wacky basketball games followed by NBA Jam, but it's one of few games that actually came close to Midway's classic in terms of popularity, thanks to its accessibility and shameless '90s pop music.
Advertisement:

The game loosely follows the rules of 3-on-3 basketball, with addition of the "Super Shot" meter that replenishs over time. You can activate special shot when the meter bar is full.

It later received a sequel named Dunk Dream '95 (also known as Hoops '96 or simply Hoops outside of Japan) released for Data East's ill-fated MLC System. This one adds 4-player support and "Super Defense" that blocks special shots. Street Slam is one of more accessible Data East titles thanks to numerous re-release through digital platforms; the game appeared on the compilation Data East Arcade Classics in 2010, and later on Wii Virtual Console in the same year. It's also released on Xbox ONE and Nintendo Switch in 2017 through Hamster Corporation's ACA series.