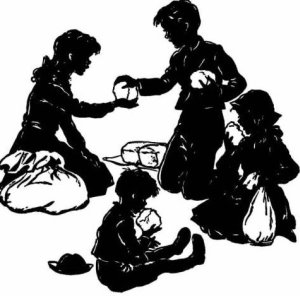 The Boxcar Children was initially written in 1924, but the version that everyone now knows was published in 1942, and was specifically aimed at young readers. The author of both versions is Gertrude Chandler Warner.
Advertisement:

The book chronicles the adventures of a family of runaway orphans, Henry, Jessie, Violet, and Benny Alden, fleeing their grandfather, who they believe to be a cruel man. They eventually find shelter in an abandoned boxcar and make it their home for several months, having various adventures, before eventually being found out and returned to their grandfather's custody. He turns out to be very nice, as well as filthy rich.

After many requests, Warner followed up the book with eighteen sequels, mostly mysteries, over which the characters gradually aged. Benny, 5 in the initial book, was 11 and working as a stock boy in a department store in book #19.

Then in 1991, the Albert Whitman & Co. publishing company decided to cash in on their continuing popularity. There are now over 100 books in the series, and counting. And a cookbook, that somehow takes recipes mentioned in passing in the books and... turns them over to children.

As of 2020, the original edition of the first book is in the public domain in the United States.

Not to be confused with The Railway Children.

The films include examples of the following: