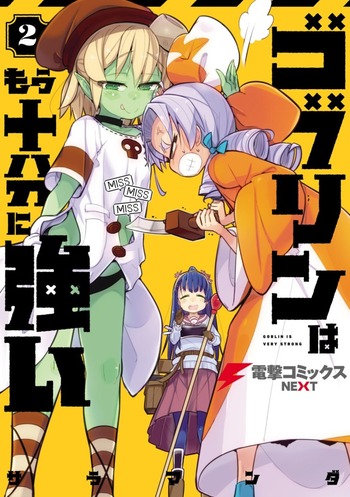 Goblin Is Very Strong (Goblin wa Mou Juubun ni Tsuyoi) is a shonen fantasy manga by Salamander, which was serialized in Dengeki Daioh "G" from 2017 to 2020.
Advertisement:

In a world of generic fantasy role playing game tropes, the goblins are hapless XP fodder for starting adventurers. Except one day Honwasabi (Wasabi for short), a young female goblin stumbles across a dying adventurer and finishes him off and gets XP herself.

Then she does it again and again...

And after this long stroke of luck and some genuine fighting, a goblin is the strongest person on the planet. Quite possibly stronger than the Maou the Demon King.

Luckily her ambitions are limited to protecting her fellow goblins, hanging out at the demon king's castle and 'harassing' Aki, an Ordinary Highschool Student girl, who's been summoned to the world and told she has to defeat the demon king to go home.