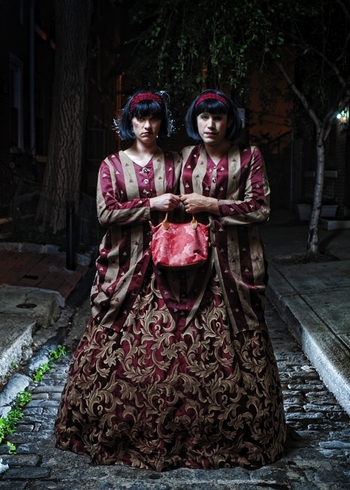 Evelyn, Evelyn,Why do we bother to stay? Why are you running away? Don't you feel like severing?
"Are you there, Evelyn?"
- "Yes, of course I'm there, Evelyn."
Advertisement:

Discovered in 2007 by Amanda Palmer and Jason Webley, Evelyn Evelyn (Eva and Lynn Neville) are a pair of Conjoined Twins from Walla Walla, Washington. They perform vaudeville songs with jazzy melodies, telling the story of their lives to their newfound audience: stories about their childhood being locked inside a chicken coop, their abduction into a pedophile ring, their years in slavery at a travelling circus with their two-headed elephant friends Elephant Elephant, and their eventual rise to fame over Myspace.

The twins started out shyly performing encores for Amanda Palmer and Jason Webley's concerts. When the audience really took to them, the sisters released their debut Concept Album in 2010 and subsequently toured the world, always accompanied by Amanda and Jason wherever they went.

They currently reside in Walla Walla, Washington, they enjoy sushi and Twix, and their favorite colors are purple and yellow.

, where you can buy them a trip to the moon, if you like.