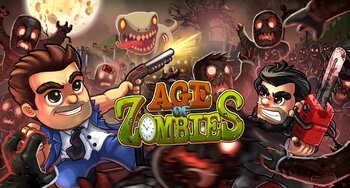 "This is Barry Steakfries. After failing to revive dwindling gramophone sales, Barry ventured into the lab of Legitimate Research. Uncovering the newest breakthrough in aviation technologies, Barry liberated the world's greatest jetpacks from the scientists, who would use them only for evil. Along the way, he also rode a robot dragon and the bird that shoots money, which was awesome and super fun. Landing in a world with monsters, Barry laced up and ran like a wind to his next destination.
Advertisement:
Now, the mild-mannered gramophone salesman, turned dragon riding, monster blasting Jetpack-based hero is ready to face a challenge, that will echo through the ages. This. Is. Age of Zombies!"
—The Story of Barry Steakfries Trailer

Age of Zombies is a 2010 Top-down Shoot 'Em Up by Halfbrick Studios, originally released on iOS, PSP and PS3 (as part of the "Minis" collection) and re-released on Sony Xperia Play, Vita and Android.

Evil Mad Scientist Professor Brains sends his army of undead to invade various time periods and destroy the mankind for all eternity. It's up to Barry Steakfries, the badass Action Hero, to travel through time (Initially it was Prehistoric era, 1930's, Ancient Egypt, Ancient Japan and the Future, later updates and ports introduced 3 more chapters: Wild West, President Evilnote Also takes place in the Wild West, but was themed around Independence Day and Professor Brains' Lab) and put an end to the Zombie Apocalypse.

Player starts with a basic gun, but can get weapons from randomly-spawning crates, with power-up ranging from Shotguns and SMG's to Riffles and Flamethrowers. Additionally, there are Grenades, a secondary weapon, most useful against large groups of zombies, especially if you are cornered. You always start with 5 of them and need to constantly get them through specific weapon pickups. There are also few weapons that can replace them, such as Bazookas and Sentries.

The goal of each level is to defeat a huge amount of zombies coming from portals. Every third level features a boss, who will also be accompanied by hordes of the undead. At that point, they will keep spawning endlessly, so your goal changes to taking down boss' healthbar until they're finished.

Barry would later star in Monster Dash and Jetpack Joyride, both are canonically considered to be the prequels. The three game would spawn their own franchise. Barry, Professor Brains, and even Zombie T-Rex also appear in various crossovers by Halfbrick.