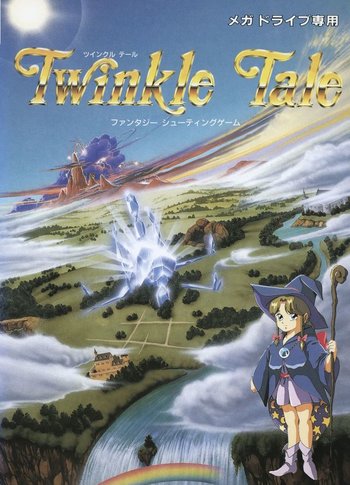 Twinkle Tale is a Shoot 'em Up game, released for the Sega Genesis in 1992.

First... there was nothing... Then there were lights! Red, Green, and Blue.

The three lights tried to engulf each other and continually clashed. The conflict between the three lights created a fourth white light, which was stronger than the others, but the white light didn't want conflict, so it sealed all four of them within stones. Red became a Ruby, Blue became a Sapphire, Green became a Emerald, The White one became a diamond, and the Darkness they were born in was sealed within an Onyx. When all five stones were in harmony, they created the world of Alpherion.

Enter our heroine Saria. She is an apprentice magician. She arrives in Picket Town in Alpherion at the request of her master, the Red Wizard Olof to see the fortuneteller Raza. Raza informs Saria that Gadou, the Black Wizard has started a rebellion and is causing trouble across Alpherion, already having captured the Blue and Green Wizards, Elan and Dohla and has already sent his legion of minions to capture Olof.

Raza hands Saria three magical items to give her the strength to fight off Gadou's forces. Saria rushes back home and the adventure begins.

Twinkle Tale plays like a overhead shooter, you take control of Saria as she runs around and blasts enemies with her different magical abilities. Each of her magical items represents a different type of gun, and can switch between them on the fly when the situation calls for it. They get stronger by grabbing Power-Up items, but taking damage downgrades the weapon you currently have equipped, actually making the game more difficult the more mistakes you make.

The game was only released in Japan, but it has been translated, and an English rom exists.

This video game contains examples of...