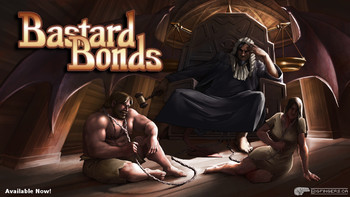 Citizen of the kingdom of Crest, you are accused of a crime and condemned to the worst punishment: being sent to Lukatt, an island filled with monsters and dangers, used by Crest as a dumping ground for criminals and inconvenient people. Whether you're innocent or not, you are not content to spend the rest of your life in a cell, and with the help of a stranger, you manage to get away from your prison and decide to rally other prisoners, inhabitants, and even monsters in search for a way to flee the island.

But how will you do so?.

Are you guilty or innocent of your crime?

Will you help those in need, or kick them lower?

Will you treat your "Bastards" like slaves, or nurture the "Bonds" of trust with them?

Bastard Bonds is a "fast-paced" Tactical RPG by CaptainGerBear. It has the honor of being his first steam game

as well as his first delve into a true RPG. The game boasts hundreds of interesting location, many recruitable allies, and true customization of your character's look, story, and personality.

Per The Wiki Rule, this has a wiki

, alongside his other games.

Note that the game, like most of CGB's games, is not safe for work, so viewer discretion is advised.