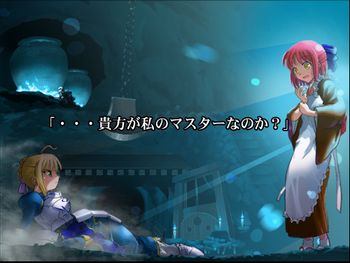 "I ask of you: Are you my master?"
Advertisement:

Battle Moon Wars is a Doujin game made by the group Werk. It is, as the name suggests, a Pastiche in the style of Super Robot Wars.

Take the three major facets of the Nasuverse: Tsukihime, Fate/stay night and The Garden of Sinners. Then mix them together into a Massive Multiplayer Crossover, and add a duo of original characters on top. Through four acts, what starts as a not-so simple maidnapping explodes into a new Grail War, as one by one, a mysterious enemy is bringing back defeated villains from Nasuverse past, with shiny new power boosts to boot.

Translation Patch so far can be found here.