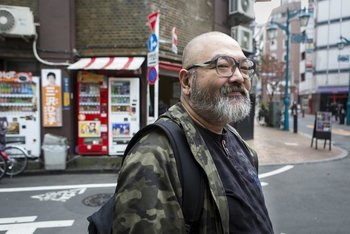 The man who put The Bear in the Bara Genre.
"Naked and bound men have excited me since I was in elementary school. I remember getting excited watching Italian Hercules movies and Hollywood science fiction films like the original Planet of the Apes. I liked the scene where Charlton Heston was ordered to take his stinky human clothes off in front of the ape's assembly, then dragged by a leather collar."
— Gengoroh Tagame
Advertisement:

Gengoroh Tagame (1964- ) is a prolific gay Japanese manga artist. Tagame is considered to be one of the pioneers of the Bara Genre as his works feature very masculine and muscled men chock-full of Male Gaze in stark contrast to the typical willowy yaoi aesthetic. The content of his adult manga can be very dark as well as containing fetish material that's too hardcore to detail here. He is seen as the Japanese analog to Tom of Finland, who illustrates men in a similar aesthetic.

In recent years, his profile has increased due to overseas attention, particularly in America. Tagame had his first non-pornographic all-ages work drawn and published, My Brother's Husband in 2014, which got critical acclaim and a Live-Action Adaptation in 2018.