Literature / The Saga of Seven Suns 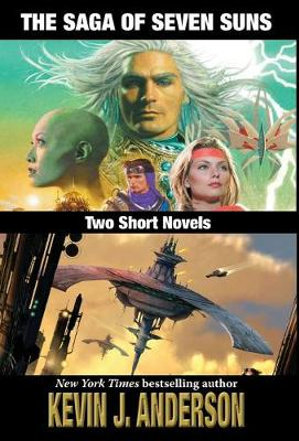 A series of seven Space Opera Sci-Fi novels by Kevin J. Anderson, set in the Milky Way in The Future. The principal players are (initially) the Terran Hanseatic League, governed with an iron fist by its dictatorial chairman, Basil Wenceslas; the Roamers, gypsies/opportunistic explorers in space; and the Ildirans, the light-loving, psychically-linked inventors of the faster than light stardrive whose homeworld is illuminated by the titular seven suns. As the first novel unfolds, the Hydrogues, evil diamond-ship-using, gas-giant-dwelling aliens, and the World-Forest (initially just a fairly esoteric means of FTL communication) become major players.

As the series progresses, other major protagonist groups are introduced including the Klikiss and their robot slaves, and the Faeros and Wentals, who, along with the Hydrogues and Verdani (the World-forest) form a fairly traditional war of the elements plot, without the typical Elemental Rock–Paper–Scissors, however, as each is capable of fighting each of the others, and losing or winning, rather than one always beating the other.

The series consists of seven books, and a prequel graphic novel:

A Sequel Series, The Saga of Shadows, ran from 2014-2016. Set a generation after the original series, it dealt with the continued fallout from those events amid the return of ancient horrors from Ildiran legend: