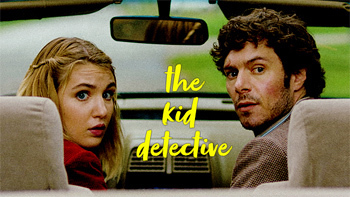 The Kid Detective is a 2020 Canadian mystery/comedy-drama. Abe Applebaum (Adam Brody) was a Kid Detective solving mysteries of petty theft, vandalism and missing cats in his small hometown. As an adult, he still works as a Private Detective... solving mysteries of petty theft, vandalism, missing cats, and who in town is gay. He barely makes ends meet, has issues with drug addiction and alcohol, gets no respect from his overbearing parents and is still haunted by the unsolved disappearance of his childhood friend Gracie Gulliver, who went missing when he was a teenager.

After the violent murder of local teen Patrick Chang, Abe is contacted by the victim's girlfriend Caroline, who's looking for answers the police are unable to provide. This is Abe's chance at solving a real case, which forces him to confront various members of his hometown, who he has ostracized over the years, and to find some sense of redemption.

Be careful. A lot of these trope headers themselves are spoilers, so proceed with caution.