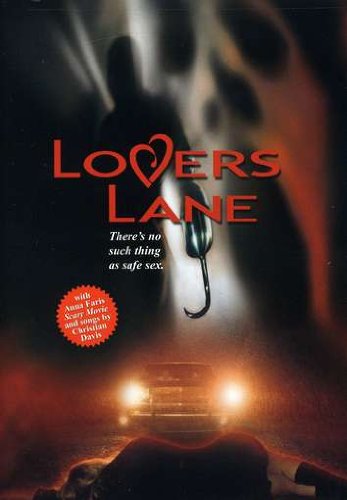 Wait... Why is Ghostface on the cover?
There's no such thing as safe sex.
Advertisement:

Lovers Lane is a Slasher Movie released in 2000.

In 1986, a small town was shaken by the violent Valentine's Day hook murders of Harriet Anderson and Ward Lamson (who were married... but not to each other) in a secluded area nicknamed Lovers Lane. The double homicide was quickly pinned on a local oddball pervert named Ray Hennessey, who was placed in the nearby Meston State Hospital, under the care of Doctor Jack Grefe, half-brother of Sheriff Tom Anderson, Harriet's husband. He was also given the (rather unoriginal) nickname "the Hook".

Things are fine until Valentine's Day thirteen years later, when Ray escapes, killing an orderly and taking his old hook (which Doctor Grefe kept under glass in his office) in the process, leaving behind a newspaper clipping which implicates he will go after Doctor Grefe's teenaged daughter, Chloe. Despite news of the Hook's escape, a group of high school students (which includes Chloe, Janelle, Doug, Tim, Cathy, Bradley, Sheriff Anderson's daughter Mandy, and Ward Lamson's son and Chloe ex-boyfriend Michael) decide to spend the night up on Lovers Lane, boozing, partying and sexing it up without having to worry about anyone, since the only people who live anywhere close to the area are Old Man Yasgur and his wife.

Of course, the Hook, who is being tracked by the police (headed by Sheriff Anderson) and high school principal Penny Lamson (Michael's mother) cannot resist all this sweet young meat, especially when the children of his original victims are among it.