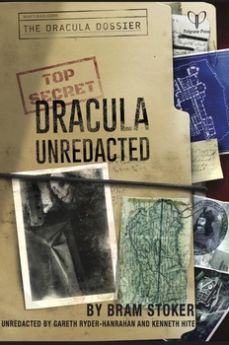 During the Russo-Turkish War (1877-1878), British Intelligence learned that vampires were real. In the late 1800s, spymaster Peter Hawkins formed Operation Edom – a covert organization within the Naval Intelligence Division, intended to bring a vampire to England as an Intelligence asset.

Un-Dead Transylvanian counts don't play second fiddle to anyone. Dracula accepted Edom's offer, broke free of his handlers, and started his own plans. Outsiders learned of the vampire's presence, and hunted him back to Europe, where he was reported destroyed. As part of the ensuing cover-up, Bram Stoker was ordered to release a heavily-censored version of his after-action report as a novel.

But one copy of the unredacted manuscript remained in Edom's files. On three occasions, it was taken out by agents who added their own notes about Edom's continuing quest for a controlled vampiric asset, whether Dracula or someone else. Now the legendary Dracula Dossier has fallen into the hands of your player-characters. Can they hunt down and destroy Dracula where others have failed, or will they be destroyed by either Dracula or Edom?

The campaign has two core books. Dracula Unredacted is the “Dossier” of the title, an expanded version of the novel (bringing in elements from Stoker's original notes, the short story “Dracula's Guest”, and the Icelandic edition Makt Myrkranna) with over 250 added notes by Edom intelligence analysts. The Director's Handbook is a compendium of locations, items, and NPCs ready to add into a game, many of which are linked to those annotations in Unredacted. It also contains suggested campaign frameworks and dramatic finales.

The Director's Handbook won the 2016 ENnie Awards for Product of the Year and Best Writing, and was the runner-up for Adventure of the Year. The Hawkins Papers, a collection of PDF handouts for use in a Dracula Dossier game, won for Best Supplement.

The Dracula Dossier contains examples of: