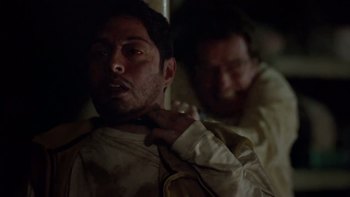 As he and Jesse clean up the liquefied remains of Emilio, Walt's thoughts go back to his time being a graduate student at the California Institute of Technology. He and a female lab partner count the percentages of elements in the human body, but after taking into account every known element, still come up less than one percent short of an entire body, with Walt musing that there must be more to a human than their chemical makeup...

As Skyler tries (and fails) to subtly get Marie's insight on Walt's apparent marijuana use and accidentally implies that Junior smokes weed, Walt goes to check on Krazy-8. To his horror, Krazy-8 not only knows his name, but knows of his family, apparently from Jesse. Walt storms in on Jesse as he tries to take the edge off in the restroom with some meth, and the two get into a scuffle over Jesse's baggy of meth before Jesse leaves, calling Walt out on not honoring his end of the bargain they struck by flipping a coin and offing Krazy-8.

Marie tells Hank about Junior's apparent weed use as she indulges her kleptomania by stealing expensive shoes, and Hank tries to scare Junior straight by taking him to the Crystal Palace, a shady motel, and introducing him to Wendy, a meth-abusing prostitute. The lessons Hank try to impart on Junior don't really reach through to him (since he doesn't light up) as Wendy returns to her motel room, where Jesse is waiting to solicit her services...

Back at Jesse's house, Walt struggles with whether to kill Krazy-8, jotting down a list of reasons to either spare him or kill him. He comes up with several reasons to let him go, though these are exclusively arguments based in morality. In turn, he can only one to kill him, though it is a much more pragmatic one: "He'll kill your entire family if you let him go." With the day growing late, Walt calls Skyler and tells her that he'll be working overtime at the car wash. Skyler, however, has found out that he quit working at the car wash, and dismissively tells him to do as he please.

Walt prepares a sandwich for Krazy-8, but when he goes to deliver it to him, suffers a coughing fit and loses consciousness. When he comes to, he reveals to Krazy-8 that he has lung cancer. Walt then returns with a second sandwich and a six pack of beers, which he offers Krazy-8 to share with him. Krazy-8 inquires as to why, and Walt says that he wants to get to know him a bit better. Krazy-8 points out that getting to know him will only make it harder for Walt to kill him, and advises him that he should just get it over with if that is what he wants to do. Walt, still undecided as to what to do with him, implores him; "Sell me."

Walt and Krazy-8 bond over the latter's musical aspirations, as well as his father being the owner of a furniture store with a catchy commercial jingle, the same furniture store where Walt bought the crib for his son. Krazy-8 learns that Walt hasn't told his family about his illness, and realizes Walt's reason for getting into the meth trade: to make money for his family, so that they could get by after he was gone. Krazy-8 jokingly offers to write Walt a check, then suggests he isn't cut out for murder. Walt considers, and tells Krazy-8 that he agrees and that he has decided to that he is going to free him.

As Walt returns upstairs to get the key to the bike lock confining Krazy-8 to a support column in the basement, however, something occurs to him. He digs out the pieces of the broken plate from when he passed out and tries to piece it together, only to find that one shard of the plate was missing! Krazy-8 had taken the shard, and was no doubt planning to kill him with it if given the chance.

When Walt returns to the basement, he prepares to unlock the bike lock, but before he does so, he asks Krazy-8 if he intends to kill him with the shard of the plate he stashed. Krazy-8 immediately tries to stab Walt, but Walt pulls on the bike lock and chokes Krazy-8 to death, tearfully apologizing all the while.

When Jesse returns the following morning, his basement is completely empty...

Hank and Gomez goes to investigate Walt's original cook site, and quickly put together a theory that a mobile meth lab caught fire and that the occupants sped off after putting it out. They also search Krazy-8's car, was which was abandoned at the site, and wonder why he would just leave it behind in the desert like this. They are also handed an important clue, as a family of Native Americans gives them the lab mask the young girl found in the previous episode.

Meanwhile, Walt is parked under an overpass, thinking back to his time at the lab, still pondering what was still missing in the chemical makeup of the human body. When his lab assistant ponders if maybe what they were missing was a soul, he dismisses the notion, stating "There's nothing but chemistry here."

Walt finally makes a decision. He returns home to Skyler, ready to confess to her his secret...

"Skyler, there's something I have to tell you."