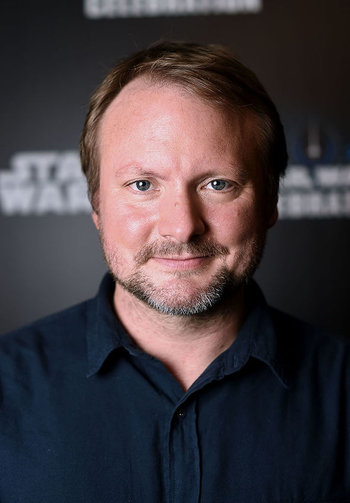 He seems to often cast Joseph Gordon-Levitt and Noah Segan for roles, even if it is just for a cameo appearance. He is also known for directing Looper and a trio of Breaking Bad episodes — one of them being "Ozymandias", which has been hailed by critics and audiences as one of the greatest episodes of television ever made.

He is One of Us, since apparently he likes Game of Thrones, and is interested in working on Doctor Who. He directed Star Wars: Episode VIII - The Last Jedi, and was later hired to develop a new trilogy of films unrelated to the Skywalker Saga before the release of the film. However, his trilogy is currently in Development Hell as of 2021. He is also known for his acclaimed mystery films Brick, and Knives Out.

Also may or may not be Mr. Plinkett's disgraceful son, though he certainly loves but fears the

Tropes applying to his works include: