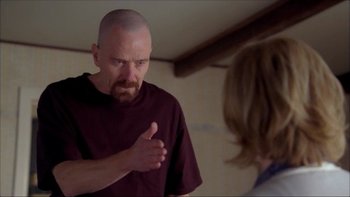 All together, now: "I am the one who knocks!"
"You clearly don’t know you’re talking to, so let me clue you in. I am not in danger, Skyler. I am the danger."
— Walter White
Advertisement:

While cartel men hijack a Los Pollos Hermanos truck carrying fry batter (one bucket of which concealed blue meth), Skyler listens to the voicemail Walt left her telling her he loved him while looking up what information she could on Gale Boetticher's murder. Afterwards, she questions Walt about his drunken proclamation to Hank that Gale wasn't smart enough to have been Heisenberg, his suspicious voicemail, Gale's murder, and his employers' involvement in it. Walt, no longer drunk on wine but heavily hungover and still drunk on his growing ego, dismisses her concerns. When Skyler suggests Walt could be in danger of opening his door and being shot on his front step like Gale, he lays down the cold hard facts as he sees it:

"I am not in danger, Skyler, I am the danger! A man opens his door and gets shot, and you think that of me? No...I am the one who KNOCKS!"

Fearful both for and of her husband, Skyler takes Holly on a drive.

Walt goes to the car wash by himself in order to complete the transfer of ownership from Bogdan to himself. Bogdan tries to explain to Walt that a boss has to be tough on his workers, like he had been on Walt when he worked for him. Before leaving, Bogdan takes a picture frame containing the first dollar he had ever made. Walt, however, tells him that the agreement they made was for him to buy the car wash "as is", forcing Bogdan to relinquish his one memento of his business to Walt. Once Bogdan has left, Walt cracks the picture frame open, takes Bogdan's first dollar, and squanders it on a can of cola.

At a diner, Mike is having a meal while Jesse drinks coffee. Mike notices Jesse's hands trembling and asks how he's doing. Jesse states he "isn't using": he is struggling with withdrawal. Mike lets Jesse have his meal, then receives a phone call and departs. Jesse offers to accompany Mike, but Mike says he can handle it.

Back at home, Junior is moody over Skyler's disappearance and anger at Walt, assuming she's angry with him because of his "gambling addiction". Walt tells him that his "addiction" doesn't control him and that he stands by the choices he made. While driving Junior to school, Walt decides to lighten the mood and take a detour, so that he can buy a car for his son. Junior, taking advantage of Walt trying to "buy him off", uses the opportunity to ask for the car of his dreams: a red 2009 Dodge Challenger.

Walt and Jesse meet outside the superlab, where Walt grills Jesse about his jobs with Mike. Walt finds it hard to believe that Jesse is being made to guard Mike. Jesse acknowledges that the situation probably started with Mike needing to "babysit" him to keep him from being a liability, but claims that he saved Mike from a robbery and is proud of his work. But Walt states that the real reason Gus is having Jesse work with Mike is because Gus can't kill Jesse, since Walt won't work without him. Thus, instead of having Jesse killed, he's trying to drive a wedge between them and must have set up the robbery to make Jesse feel like a hero. Jesse, upset by Walt's self-centeredness, doesn't believe him and skulks off to the lab.

Partway through their cook, Jesse is called away by Mike, to Walt's chagrin. Refusing to clean the lab by himself, he heads up to the laundromat to enlist the help of a few migrant workers. At first, the women are scared to go down to the lab, but Walt manages to convince them with some cash incentive, silently gloating to Gus via the surveillance cameras while the women clean.

Mike and Jesse make their way to a house occupied by tweakers who had gotten a batch of blue meth, but not from Gus. Mike tells Jesse that they are to watch the house, but Jesse insists on getting the meth back quickly. He first tries knocking on the door and asking for the meth, pretending to be an addict himself; but is rebuffed. Insisting that he knows junkies to Mike, Jesse then gets a shovel and starts to dig a hole in the front yard. When one of the tweakers sees what he's doing, Jesse convinces him to keep digging, distracting him so he can go inside. Another junkie is inside, and points a shotgun at Jesse in his paranoia. When Mike enters from the back door and distracts him, however, Jesse gains the upper hand and knocks him out.

Mike and Jesse retrieve the bucket of fry batter and the meth. The bucket has a message written on it in marker: "¿Estás listo para platicar?": Ready to talk?

After the superlab is cleaned, Walt and the migrant workers return to the laundromat, only to be confronted by Tyrus, who orders the women to board a bus to "take them back to the Honduras". Walt begs Tyrus not to take them away and have Gus blame him instead, but Tyrus tells him "he already does".

Mike and Jesse debrief at a diner. They are joined by Gus, who excuses Jesse for a minute while he discusses matters with Mike. Mike relays the message on the bucket, from the cartel, to Gus. Mike wants to have more operators on hand so they can retaliate, but Gus wants to settle matters without going to war, and instead wants to arrange a meeting. Before leaving, Gus asks Mike to tell him how Jesse did.

As Gus leaves, he praises Jesse. When Jesse asks why him, Gus tells him that he likes to think he can see things in people. Jesse doesn't know what to make of this, but his spirits seem to be lifted.

Skyler returns home, and sees the Dodge Challenger in her parking lot. After Junior leaves to take his new car for a ride, Skyler tells Walt he has to return it the following morning: such a costly car would contradict their ruse of being of modest means and having just bought a car wash. Walt says he's worried Junior would blame Skyler, but Skyler is already resigned to the fact that she would be blamed for taking from him a gift his loving father gave him. She leaves him with a few piercing words: "Someone has to protect this family from the man who protects this family."