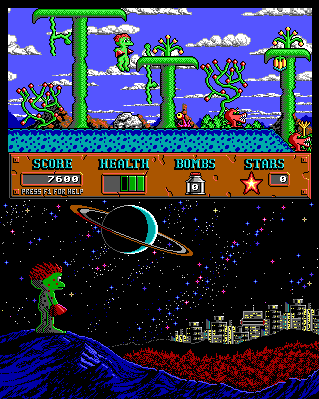 Cosmo's Cosmic Adventure: TOP: Normal Gameplay, BOTTOM: Episode 2's ending screen
Normally, a medium's depiction of characters may be limited by its size or ability to display them. A manga or comic may have its pages split up into smaller panels and the detail within that small space is limited, an illustrated story may have text mixed in with the art, causing the art to be shoved into corners, and a video game may have its characters depicted in pixels, which, at most, are about the size of your thumbnail, and the amount of which can also be counted within the number range of unpopped kernels in a bowl of popcorn.
Advertisement:

Suddenly the next page (or even two pages), or screen of a game, explodes with stunning detail, or a closeup/larger version of a character that has never (or has extremely rarely) been drawn in that much detail. However, this can also be used to great effect in horror, as if the entity involved is malicious and has transcended a metaphysical barrier (say, become an Eldritch Abomination) relevant to the media. If it's near the end of the story, it may symbolically mark a turning point, a momentous occasion, or even a shocking moment; or, if it's also at the artist's discretion, it may be an opportunity to show off their artistic skills. Usually, old comics would have a special page (usually called a "pin-up"), dedicated to showing off the skill of the artist, and would either take up the whole page or a two-page spread, and old video games may have a full-screen still image (or very large sprite) as part of the story, or as congratulations to the player.

This can also be used to highlight the detail that a peripheral, or a special overall upgrade to the medium, brings to the game or system when compared to previous entries on the same basic platform.

As this trope deals with limited-detail print, still-image, or video game media, please don't list examples from films, animated media, or TV shows, since the quality of the imagery can often vary wildly from shot to shot. Since some of this media also uses this trope to portray a story-changing, shocking, or other special event, all spoilers are unmarked.

In Manga, it often overlaps with Splash Panel.