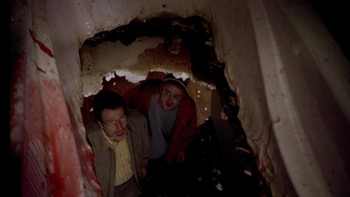 Walt and Jesse deal with a very nasty chemical spill.
Walt: Do you think he is capable of listening to reason?
Jesse: I mean, what-? What kind of reason? You mean, like, "Dear Krazy-8, hey, listen, if I let you go, will you promise not to come back and waste my entire family? No Colombian Neckties?" You mean that kind of reason? No, man, I can’t say as I have high fucking hopes where that's concerned.
Advertisement:

Teaser: We pick up right where we left off in the pilot episode, as Walter and Skyler finish having sex, and Walt goes to the bathroom to wash up. We flashback to 12 hours earlier, as Walt and Jesse pay a Piro, Tiwa, or Pueblos man to pull the RV from the ditch. As they are about to leave and agree to park the RV at Jesse's house, they hear a coughing noise and realize that one of the two men in the back (Krazy-8) is still alive. Cue opening credits.

After the title rolls, Walt wakes up on the floor of the bathroom naked, and joins his family for breakfast. Jesse calls the house phone, pretending to be a telemarketer, and Walt covers the obvious lie. Jesse demands that Walt help him out after their semi-disastrous outing yesterday which has resulted in the RV contain the dead body of Emilio and the still quite alive one of Krazy-8, the latter of which something Jesse is quite anxious about. Walt informings Jesse he has to go to work first. Afterwards, Skyler redials and hears Jesse's voicemail filled with slang, leading her to investigate his website and ponder what a MILF is. Jesse, meanwhile, goes to check on the RV, and finds the door broken open along with the tape used to tie up Krazy-8 scattered in front of it.

Walt barely makes it through teaching while hallucinating his students asking him about murder (when they are actually asking about midterms), grabs some hydrofluoric acid from the supply closet, and heads to Jesse's house. On his way, a half-blind Krazy-8 stumbles down the street, having escaped from the RV. Upon seeing Walt, he sprints off only to collide with a tree and knock himself out again. Walt brings him back to Jesse's house and locks him in the basement. Walter wonders how they can prevent him from escaping again, noting that just tying him up didn't stop him for long. Jesse briefly ponders this, then goes to his garage and gets his bike lock, which he uses to chain Krazy-8 to one of the support beams in the basement. Walt and Jesse then turn to the subject of Emilio's body, and Walt says that the best way to leave no evidence is to dissolve him in the acid he brought along. They also agree that Krazy-8 can't be left alive, though they are both very reluctant to be the one who actually kills him. Walt eventually suggest that the fairest way to distribute the tasks is by coin flip. After a tense flip, it's decided that Jesse will dispose of the body while Walter will kill Krazy-8. Walter instructs Jesse to shop for a plastic bin, specifying that it must be one made of polyethylene. Jesse, however soon give up after a brief visit to the local home depot store, because he is unable to find a container big enough for the body.

Meanwhile, Walter is drinking beer as he is gathering courage in Jesse's kitchen, and ponders various methods of murdering Krazy-8. He eventually goes down to the basement with a plastic bag and finding Krazy-8 awake. He finds himself unable to kill him, and instead retreats to the kitchen. Where he makes Krazy-8 a sandwich, and also brings him makeshift toiletries. In order to relieve his stress, he takes some of Jesse's marijuana, and after several failed attempts at roll a blunt, he eventually manages to make a smokable one.

Jesse returns empty-handed home from shopping, and while he is at first highly amused by the visage of his former high school teacher smoking pot in his kitchen, he is somewhat less amused when he realizes that that Walt made the blunt from his marijuana, and he is downright upset when he learns that Walt hasn't completed his end of the deal either. Walt promises an understandably incredulous Jesse that he will take care of the Krazy-8 situation tomorrow and leaves to meet Skyler for a pre-natal check-up, where she privately asks him about his connection to Jesse Pinkman. Walt, still a bit high, informs her that he's a former student who sells him pot, and politely tells her to get off his ass. Skyler later pays Jesse a visit as he is moving Emilio from the RV to the house, and tells him not to sell Walter weed anymore, warning him that her brother-in-law is a DEA agent. Jesse barely avoids detection and manages to put Emilio in the bathtub upstairs, where he applies the acid.

When Walter comes back, Jesse yells at him that Skyler came by and almost caught them, and he calls Walt out on not mentioning anything about having a DEA agent in his immediate family and not having upheld his part of the deal. Walt asks him if he was able to upheld his end, and Jesse admits that he couldn't find a bin big enough for a human body, and says he improvised a bit by using his bathtub instead. Walter, horrified, runs to the hallway where acid is already leaking through the ceiling. Emilio's half-liquified remains then burst through the ceiling with what's left of Jesse's destroyed bathtub and completely cover the entire hallway. Walter tersely explains that plastic is the only substance hydrofluoric acid cannot eat through, and glares at Jesse.

Finally, in the desert, two children are playing, and one of them discovers Walt's discarded gas mask and puts it on.