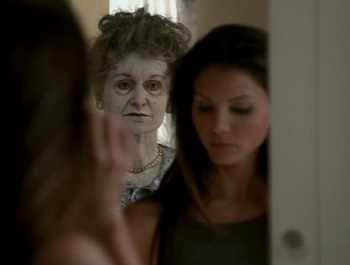 "I think you are gonna pack your little ghost bags, and get the HELL out of MY HOUSE!"
—Cordy

At Angel Investigations, Cordelia reenacts her commercial audition for Doyle, wondering why she didn't get the role. The phone rings, and the answering machine picks up. As Cordelia's friend Aura leaves a message, Cordelia still doesn't answer the phone, explaining to Doyle that she doesn't want to talk to anybody until after her career takes off and she has a better apartment. Doyle wanders into Angel's office, and Angel reluctantly answers Doyle's questions about Cordelia, reminiscing about her high school reign of terror with the Cordettes. Meanwhile, Cordelia arrives at her rundown apartment, where the key sticks in the front lock, the fluorescent light flickers and buzzes, brown sludge spurts from the kitchen faucet, and roaches scurry across the TV screen and floor. She frantically calls building services, only to be assured that the exterminator sprayed for roaches that day. Upon discovering the multitude of dead roach bodies covering her floor, Cordelia calls Doyle to take him up on his offer of a place to stay. Hearing the phone ring inside, Doyle rushes to let himself into his apartment, but a menacing demon—hired to strong-arm Doyle into paying his debt—greets him from the shadows. Doyle eludes the demon and flees his apartment. Meanwhile, Angel finds Cordelia has come to stay, indefinitely.

The next morning, Doyle stops by Angel's apartment, upset to see Cordelia spent the night. Cordelia, unpacking her cheerleading trophies and scorched high school diploma, informs Doyle that she gave his address to somebody from his "part of England." The information worries him, and when Angel calls down that Doyle has company, he bolts out the back. When he reaches the building's foyer, however, Angel is silently waiting there, having tricked Doyle into confessing his secret. He proposes a deal—if Doyle will help Cordelia find a new apartment, Angel will deal with Doyle's demon debt collector.

Doyle and Cordelia go apartment hunting. After many failed attempts, Cordelia is ecstatic to be shown into an airy, beautiful, rent-controlled apartment. Telling Doyle that the unsightly wall that needs removing adds to its perfection, Cordelia immediately closes the deal. In the meantime, Angel waits at Doyle's apartment until the demon, Griff, shows up. Griff explains that his boss no longer cares about the money, but needs to make an example of Doyle by ordering him killed. Angel informs Griff that he'll be the next victim unless he convinces his boss to accept Angel's guarantee of payment and to let Doyle live. Later that night, Doyle is unhappy that he has to pay, but concedes that it is better than the alternative. Angel probes for some hint of Doyle's backstory, but retreats when his friend grows uncomfortable. Meanwhile, Cordelia is already asleep at her new apartment, oblivious to the radio turning itself on and bureau drawers opening by themselves. She suddenly wakes when a drawer bangs shut and soon discovers why this apartment was so reasonable—it is haunted. She spends the rest of the night huddled in her bed, which floats four feet in the air.

The next morning, after Cordelia's bed thumps to the floor, she attempts to go about her normal routine, until the ghostly activity starts up again in the living room. Desperate to keep her beautiful apartment, Cordelia pretends to be unaffected by the flying objects and cold wind that the ghost conjures, and even manages a few snarky exorcism quips. Angel and Doyle stop by with a housewarming gift and quickly realize the apartment is haunted when the word 'die' starts dripping from the wall in blood. Cordelia, insistent on making the apartment work, refuses to leave. Doyle and Angel carry her out, promising to help her perform an exorcism. At the office, the team researches the building's history for a clue to the ghost's identity, which might give clues on how to get rid of it. The evidence points to Maude Pearson, builder, owner, and first resident of the Pearson Arms building. While Doyle goes to pick up the arcane supplies for the exorcism, Angel finds out from Detective Kate Lockley that Maude Pearson's sudden fatal heart attack appears in the police archives, due to the suspicious disappearance of her son Dennis the same day. Learning that there was friction between Maude and her son's fiancée, Angel agrees with the prevailing theory that Dennis murdered Maude, made it look like natural causes, then skipped town with his girl. At the office, Cordelia gets a call from Angel and goes to meet him at her apartment, but it turns out that Maude's ghostly spirit is imitated his voice, mistaking Cordelia for Dennis' fiancé. Puzzled by the absence of murders in the building, Angel asks Kate to check for reports of suicides in that apartment — there were several — and calls the office to warn Cordelia. Doyle answers and reports that she isn't there. He plays back the answering machine, which recorded the call Cordelia took from Angel. Clutching the payphone receiver, Angel says, "That's not me."

At the apartment, Cordelia folds under Maude's spate of abuse. When Doyle and Angel burst in, they find Cordelia hanged with an electrical cable. Frantically, Doyle unwraps the cord while Angel lifts her down, and Cordelia coughs back to consciousness. They begin the exorcism without Cordelia, who is an incoherent sobbing wreck from Maude's emotional and physical attacks. A cyclone of flying debris prevents them from completing the ritual. Angel shouts to Doyle that they need to leave, and they carry the distressed Cordelia to the door. Before they can exit, however, it suddenly slams open to reveal the barrels of three enormous guns belonging to Griff and two of his cronies. Angel reminds Griff that he agreed to let Doyle pay, but the demon replies, "I lied." Doyle and Angel brawl with the goons, while Maude pulls Cordelia back into the bedroom to continue tormenting her. However, Maude makes a tactical error by calling Cordelia a "bitch". The remark snaps Cordelia back to reality, and she begins to fight back, finding her inner strength. As Angel snaps Griff's neck, Cordelia exits the bedroom with Blank White Eyes, using a cast iron lamp to knock down the partition, revealing a skeleton disintegrating inside the wall. Maude screams in shock and then, in a mystical flashback, the team learns that Maude Pearson prevented Dennis from leaving with his fiancée by bricking him alive. Upon completion, Maude suffered a heart attack and died. Now Maude's spirit stands in Doyle's binding circle and screams, as the angry ghost of her son Dennis roars to the attack, dispersing and banishing his mother's ghost forever.

As Angel watches Doyle install a new deadbolt on his apartment door, he quietly reminds Doyle that he'll need to reveal his background at some point. Meanwhile, Cordelia is raving about her new apartment to Aura on the phone. She admits she has a roommate, but claims she "never sees him." Hearing himself mentioned, the ghost, whom Cordelia affectionately calls Phantom Dennis, gently makes his presence known.