Giles: This is madness! What can you have been thinking? You are the Slayer! Lives depend upon you! (begins pacing) I make allowances for your youth, but I expect a certain amount of responsibility, instead of which you enslave yourself to this, this... (stops pacing) Cult?
Buffy: (wearing a cheerleader outfit) You don't like the color? 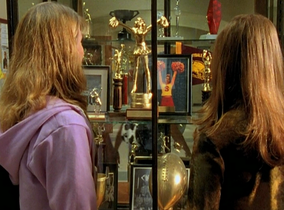 Buffy wants to be a cheerleader at Sunnydale High, just like she was in LA. Giles forbids it, claiming that as the Slayer she doesn't have time to be peppy. She points out that he has no way of stopping her and says she just wants to do something normal and safe.

Elsewhere, in a dark space with dolls and dried flowers hanging from the ceiling, a robed figure dangles a medallion over a cauldron of bubbling green liquid and yanks a cheerleader-shaped Voodoo Doll off a hook. Ominous music plays.

At the tryouts, Buffy and Willow discuss Giles while Xander admires the stretching girls. Xander gives Buffy a “good luck” bracelet bearing the legend "Yours Always”, which he insists came that way. Cordelia arrives to complain about Amber Grove, who is demonstrating her exceptional ability by standing on the toes of one foot while raising the other above her head. Willow greets her friend Amy Madison, expressing surprise that she's trying out for the squad and noting that she’s lost a lot of weight.

Amber performs an extended, impressive routine. Amy tells Buffy about her mother, who she says coaches her for 6 hours each day. As they watch, something strange begins to happen to Amber. Smoke pours from her pompoms, and then her arms catch fire. Buffy rushes to smother the flames with a banner while the others look on in horror.

Back in the library, Giles tells the gang that this incident was not caused by vampires, though it's certainly abnormal. He explains that Spontaneous Human Combustion has been occurring for centuries. As combustion is usually caused by extreme rage, Willow volunteers to hack into Amber's school records and Xander offers to goes to ask around. Buffy asks them to be careful.

At home, Buffy finds her mother unpacking crates of artwork for her gallery. Buffy tries to get her mother interested in tryouts, but she is distracted. She expresses hope that cheering will keep Buffy out of trouble, points out that she’s too busy to help her train, and leaves.

At tryouts the next day Amy bungles a cartwheel, landing on Cordelia. Amy shows Buffy her mother's cheerleading trophies, and paints a glowing picture of Catherine Madison: she carried a cheering team to a championship, became homecoming queen, weathered a bad marriage to Amy’s lazy, philandering father, paid her way through cosmetology school, raised Amy comfortably, and always maintained her figure. Buffy tries to tell Amy that she doesn't have to become her mother, but Amy still leaves upset.

Willow fills in some details from when she and Amy used to hang out in middle school. Catherine is strict and obsessive about her looks. When she was on a diet, Amy used to head to Willow’s house for brownies. Buffy inquires about Amber, but Willow hasn’t found anything. Meanwhile, Cordelia corners Amy in the locker room and threatens retribution if Amy’s mistake costs Cordelia her spot.

Ultimately, Cordelia makes the squad, while Buffy and Amy are relegated to first and third alternate. Back in the room with the cauldron, however, another doll is prepared by covering its head with a rag. This one is for Cordelia.

The next day, Buffy’s mother brings her old high school yearbook to breakfast and tries to convince her to join the yearbook club. When Buffy protests that she wants to do her own thing, not her mother’s, she replies that her own thing got her kicked out of school.

At school, Xander notices that Cordelia hasn’t insulted him all day. Talking to Willow, Xander diagnoses himself with “invisible man syndrome” and prepares to ask Buffy out. He never gets the chance because Buffy is distracted by Cordelia's confused behavior. Cordelia wanders outside to her driver's ed class. She seems to be having trouble seeing. She tries to avoid getting behind the wheel but is put there anyway. She ends up crashing through the school fence into traffic, narrowly avoiding hurting anyone. Buffy tackles her out of the street just before a van mows her down, revealing that her eyes have gone completely blank. Another cheerleader is off the squad.

In the library, Giles identifies sudden blindness as a classic sign of witchcraft. Buffy notes that cheering is all the victims have in common. Giles infers that someone hates cheerleading, but Buffy thinks that someone likes it too much. Their new suspect is Amy. Giles is able to find a potion recipe for detecting witches.

The gang prepare the spell in the biology lab. The solution turns blue when it hits Amy’s skin, confirming that she’s been casting spells. At the same time, however, the class panics as a girl’s mouth disappears from her face. Amy looks just as shocked as everyone else.

Amy arrives at home, at the house with the cauldron, and seeks out her mother. She demands that her mother write her history report and complains about not being on the team yet. She reveals that she has Buffy's bracelet and heads up to the attic.

Next morning Buffy bounces into the kitchen, singing and acting stereotypically blonde. She lets slip that she's the Slayer (which is fortunately ignored) and bounces out the door, leaving her mother confused. At practice she continues to behave erratically. When she accidentally throws the cheer captain into a wall, Amy makes the team. Willow and Xander stop Buffy from blurting out that Amy's a witch and drag her from the room. As they carry her through the hallway she suddenly collapses.

Giles informs the gang that this is a bloodstone vengeance spell, which causes intoxication before shutting down the immune system. The witch wants Buffy dead, not just off the squad. She only has a few hours. Fortunately, Giles has found a way to reverse all the spells if they can get to the witch's Spell Book. Xander and Willow keep an eye on Amy while Buffy and Giles go to search her home.

At the Madison house they confront Catherine, who is sitting on the couch eating brownies. She tries to get them to leave, but they barge in. From the brownies and a few verbal gaffes, Buffy realizes that Catherine is really Amy; her mother switched their bodies. Amy-as-Catherine explains the way that her mother used to treat her and that she didn't know about her powers until a few months ago, when she woke up in her mother's bed. Although her energy is fading, Buffy reassures Amy that everything will be fine. After Giles searches the Madison attic and finds the spellbook, all three head back to the school.

The basketball game has begun and Catherine-as-Amy is with the rest of the cheerleaders at the gym. Giles carries Buffy into the science lab and gently lays her on a table, using his suit jacket as a pillow. They only have a few minutes. Giles prepares a potion and starts an incantation. As it begins to work, Amy and Catherine get short glimpses through each other’s eyes. These flashes disorient Catherine-as-Amy, but also tip her off to the spell taking place in the biology lab. Willow and Xander attempt to stall or stop her, but she chokes Xander with a spell and punches Willow. Unable to open the lab door, she grabs a fire-axe and breaks it down. As she raises the ax to kill Buffy, Giles' counterspell finally work and all of Catherine's spells are reversed. Amy is back in her own body.

As Buffy gets off the table and greets Amy, Catherine tackles her to the floor. Using magic, she pins Giles against a wall with a table and snags the axe from Amy. She tells Amy how much she despises her and threatens to send her where she won't cause any more trouble. Buffy stands, informs Catherine that she's feeling better, and punches her across the room. Catherine returns the favor with a spell. Her eyes go black as she prepares her next attack. At the last second, Buffy drops a large mirror from the ceiling, reflecting Catherine's spell back to her. She disappears with a wail in a flare of purple light. After a few moments Xander and Willow burst in to help, only to learn that Amy was her mother and everything is fine now.

Back at home, Buffy’s mother sits down to talk with her. She has concluded that she simply doesn’t understand Buffy, because Buffy is sixteen and she isn’t. When Buffy asks if she ever wishes she could be sixteen again, she says no: "Not even if it helped me understand you." A grateful Buffy kisses her and leaves. "I don't get it," she repeats.

At school the next day, Amy gleefully complains about life with her father, who is smothering her with caution and love and brownies. They stop by her mother's trophy case one last time to speculate. As they walk away the eyes on the trophy begin to move and Catherine squeals helplessly.