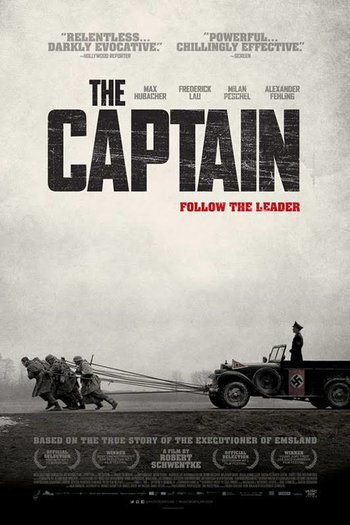 "Who do you think you are?"
— Willi Herold trying on his new, fateful persona
Advertisement:

Der Hauptmann (The Captain) is a 2017 historical drama written and produced by Robert Schwentke.

April 1945, two weeks before the end of the Second World War. Willi Herold, a nineteen year old German desertor, is on the run for his life from his Nazi pursuers. As he makes his way across the cold, harsh landscape of the Emsland region in north-western Germany, he makes a startling discovery in an abandoned Wehrmacht vehicle: the pristine uniform of an SS Luftwaffe Captain. Eager to get out of his worn out, wet clothes, he slips the uniform on and begins a chilling transformation that would end up costing almost two hundred people their lives.

Inspired from the real story of Willi Herold, nicknamed the Executioner of Emsland, the film depicts his meteoric rise from simple private to all-powerful (albeit fake) captain during the last chaotic days of World War II, and is a chilling meditation on the corrupting influence of power, blind obedience and the influence of the Nazi regime on everyday people.