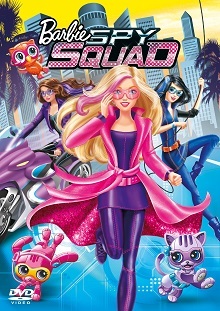 Barbie: Spy Squad is a Barbie movie that was released on March 1st, 2016.

Barbie stars as herself, and alongside Teresa and Renee is a champion gymnast and parkour expert. Their skills get the attention of Auntie Zoe's spy agency, and the girls are soon recruited to help catch a wily cat burglar who's eluded every other agent so far. By working together, the girls must stop her before she steals enough gems to power a doomsday machine! Like James Bond, Totally Spies! and Charlie's Angels but with Barbie.