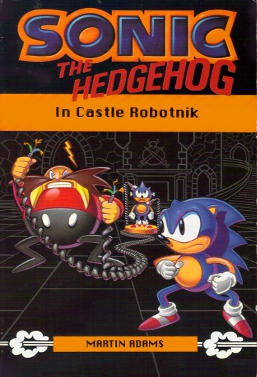 Sonic the Hedgehog In Castle Robotnik is the fourth, and last, book written by the collective Pseudonym Martin Adams. It was published in 1994 and while other books in the series where separate stories this is a sequel to Sonic the Hedgehog in Robotnik's Laboratory.

Dr Robotnik is at it again! With a scheme diabolically heinous, UN-speakably evil and well, not very nice at all; the grisly doctor is attempting to make a film! Yes a film and he's digging out all the old classic monsters in an attempt to win one of the prestigious Egggscars; of course being an Evil Genius he's not content to simply apply special affects and has instead created fiction's most horrid creations. The unwitting stars of the show are, of course, Sonic and Tails as they attempt to fight off the cohorts of evil, save their friends and attempt to get some sort of TV spin off.

The Book Contains Examples of the Following Tropes: