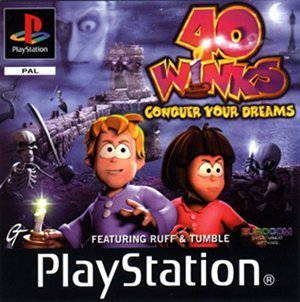 We're here to send that grumpy Nitekap to beddy-byes!
Winks are happy little creatures who bring good dreams to humanity. Their job is also to stop the HoodWinks, their Evil Counterparts who bring people nightmares. And for the most part, this cycle of giving dreams and stopping nightmares goes smoothly... until Nitekap, a mad scientist/sorcerer-type guy with raging insomnia, decides that if he can't sleep well at night, well, no one will. He and his sidekick Threadbear kidnap all of the Winks until there are only 40 left, and even those he manages to snatch up.
Advertisement:

Enter Ruff and Tumble, a pair of siblings who have taken it upon themselves to rescue the Winks from Nitekap and Threadbear. Fearlessly, they enter the world of dreams to hunt out the missing Winks. Armed with only a candle and a teddy bear (and the ability to transform into a number of more powerful forms), the two siblings set out to stop the evil Nitekap and ensure the world's good dreams continue for all eternity!

This Platform Game was developed by Eurocom, published by GT Interactive Software, and released in November of 1999 exclusively for the original PlayStation. A Nintendo 64 version of the game was planned, advertised, and completed, but due to financial troubles, it was never released and its existence was considered an Urban Legend of Zelda... until 19 years later, when a Kickstarter campaign

was created by Piko Interactive to finally give the Nintendo 64 version a proper release on the system, making it the first game to be published on the Nintendo 64 since its discontinuation sixteen years prior in 2002.