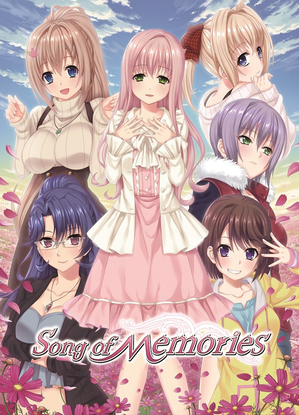 Song of Memories is a Visual Novel with light RPG elements created by Pure Wish and released on the PlayStation 4 in Japan in April of 2017 and a release published by PQube for the US and EU in February of 2019.
Advertisement:

Minato Kanishiro is a 2nd-year student at Ouka Academy in the small town of Utanami, where he lives alone with his younger sister Fuuka after their parents died in a plane crash two years prior. He learns that his childhood friend Kanon Hiiragi, who has spent years in various hospitals both overseas and in Japan, is doing well enough to return home for a while. However, as her parents also died in an accident, she has no home to return to, so the Kanishiros invite her to live with them.

While unpacking Kanon's belongings, Minato discovers a strange device called a Dream App, which contains a program wherein five AI-controlled idol singers named "Dream 4 U" (D4U) appear and promise to fight for Minato if he's ever in danger. That declaration holds true shortly thereafter when Minato and all of his friends are attacked by a strange monster shortly after Kanon's welcome party in a local park, where D4U is able to destroy it with their song.

What follows begins as a Slice of Life story between Minato and his circle of friends: longtime friend Yuno Wakatsuki, third-year senior Satsuki Tsushima, first-year junior Natsume Kurihara, the mysterious Akira Tabunoki, and best friend Makoto Asukaya, while rumors of the mysterious "X Virus" continue to persist throughout the month.