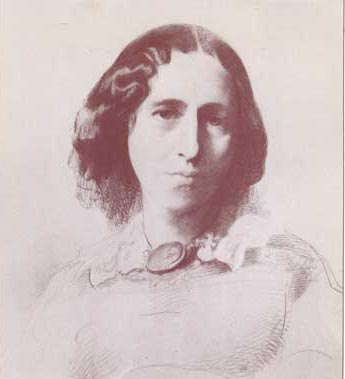 George Eliot is the Pen Name of Mary Ann, or Marian, Evans (22 November 1819 – 22 December 1880), an English novelist. She was roughly contemporary with Charles Dickens, but started writing later than he did. Her first fiction, an installment of a story later collected in Scenes of Clerical Life, was published in 1857, and her first novel, Adam Bede, in 1859. Her best-known novels are Silas Marner and Middlemarch, the latter usually being considered her masterpiece.

She wrote chiefly about rural, provincial middle-class life — the subtitle of Middlemarch is "A Study of Provincial Life" — and was a shrewd observer of people's thoughts and motivations, with a dry sense of humour.

Her other fiction includes:

She also wrote poetry, and (after giving up her childhood Anglican faith) translated antireligious works such as Feuerbach's Essence of Christianity from the German. The OED references her as the first use of the words "lampshade" and "lunchtime", and is also the first recorded use of the word "pop" as in Pop. Perhaps of even more importance to tropers, she wrote Silly Novels by Lady Novelists, perhaps the first ever listing of Mary Sue Tropes.

She lived fairly openly with her lover George Henry Lewes, whom she considered her husband though he was married to another woman (they had an open marriage). It was one factor in her using a pen name, given how scandalous such a relationship was at the time. She supported abolition of slavery, aiding the poor, feminism, Irish home rule and religious skepticism through essays in the left-wing Westminster Review. She was briefly married to John Walter Cross in her last year of life.

Oh, and her family vehemently denied she had a very big right hand. Why? Long story short, when she was younger, in a chat with a neighbor she boasted about how much bigger and stronger her right hand was after years of churning. This neighbor told the story to her first biographer (after her death) as a humourous anecdote, and her family were so appalled at the intimation that she'd done hard manual labour they spent years demanding other biographers repudiate the story.

Works by George Eliot with their own trope pages include:

Other works by George Eliot provide examples of: