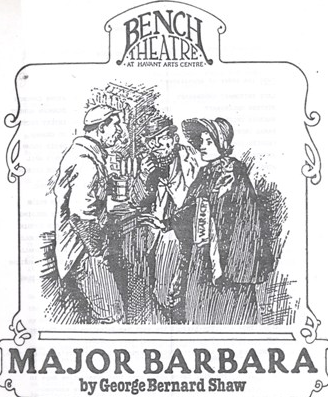 Major Barbara is a social critique play by George Bernard Shaw from 1905.
Advertisement:

After many years of being estranged from his family, Andrew Undershaft, a wealthy industrialist who specializes in the manufacture of gunpowder and weapons, returns home to meet his three children. His wife, the Lady Britomart, has her own plan to convince him to make his son Stephen the family heir, despite the Undershaft family tradition of appointing a foundling to inherit the family fortune. Caught in the middle of this is the title character, Undershaft's rebellious older daughter and a major in the Salvation Army, who tries to get everyone to see the value of her work.

As the agendas and philosophies of the different family members collide, the question is raised: who among them is truly in the right?

Adapted to the screen in 1941 by George Bernard Shaw himself, the film stars Wendy Hiller, Rex Harrison, and a young Deborah Kerr.