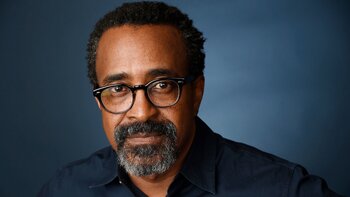 Timothy Meadows (February 5, 1961) is an American actor and comedian best known for Saturday Night Live and The Goldbergs.
Advertisement:

Meadows was hired as a cast member in 1990 (along with Chris Rock). At the time, it was the first time two African-American males were hired. Despite being overshadowed by Chris Rock and almost being let go after the infamous Season 20 (due to Lorne Michaels being forced to revamp his cast and show), Meadows ended up staying on since Ellen Cleghorne left and Lorne wanted the show to have some racial diversity. Being the most seasoned member of the almost entirely new cast gave him the opportunity to take on more starring roles in sketches and finally break out. With this, Meadows became the first black cast member to stay on the show longer than five seasons and one of the show's longest-running cast members at a literal decade (1990-2000).

He was married to Michelle Taylor and they have two children.