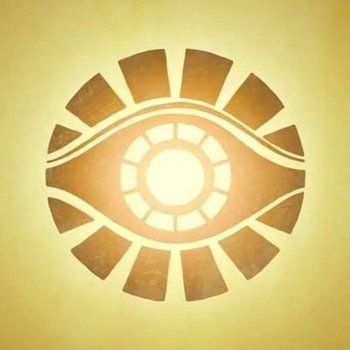 Nothing stays buried.
And there is nowhere to hide.
The Path is an American television drama series starring Aaron Paul, Michelle Monaghan, and Hugh Dancy. The show portrays members of a fictional religion known as Meyerism.
Advertisement:

The series was ordered by Hulu in March 2015 with a straight 10 episode order. The series was originally titled The Way, but was changed to The Path in September 2015 due to its similarity to real-life ministry and alleged cult The Way International. The show debuted on March 30, 2016. On May 4, 2016, Hulu renewed the series for a second season. In April 2017 a third season was announced beginning in early 2018. In April 2018, The Path was officially declared cancelled, with a number of loose ends unfinished.

In many ways it is a Soap Opera. It is the story of the Lane family, devotees of Meyerism, a spiritual philosophy founded in 1974 by psychiatrist Steve Meyer with fellow seekers including Hank and Gaby, the parents of Sara Armstrong Lane, now the community's chief counselor and midwife. Her husband Eddie Lane is a convert who was helped by Meyerism after the suicide of his brother Johnny. With their children Hawk, 16, and Summer, 9, along with Sara's brother Russell, his wife Nicole and their five children, they live on a seemingly idyllic communal farm in New York state. Complicating matters is the fact that Steve is dying in Peru and almost nobody knows it — they think he's just working on another book — and that the pro tem leader, Cal Roberts, is an alcoholic con man consumed by his own ego and self-interest. During an initiation rite with entheogenic drugs, Eddie sees something he wasn't meant to see — and everything starts to come apart.

Creator Jessica Goldberg and producer Russell Barnes did extensive Worldbuilding for the setting. The faith has a detailed structure

has a lot of detailed analysis of the series, the characters, and what Meyerism is and isn't, and somewhat follows the actors if you'd like to see them in other things.