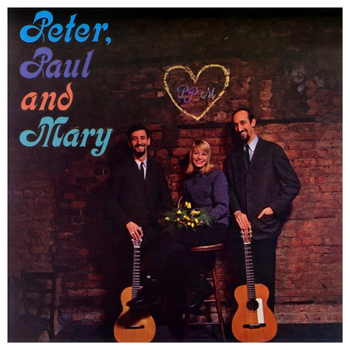 The defining act of the 1960s folk boom, and one of the most important musical acts of the decade in general, Peter, Paul and Mary were an act who not only popularized many of the greatest folk standards of the 20th century but whose music was a key element of the decade’s civil rights movement and continues to enjoy success and relevance to this day.

Singer/comedian Noel Stookey (b. December 30th, 1937) and vocalist Mary Travers (November 9th, 1936 - September 16th, 2009) met on the nightclub circuit in SoHo in the early 1960s and began writing and performing songs together. They were later introduced to singer/songwriter Peter Yarrow (b. May 31st, 1938), then a teaching assistant and occasional folk singer, by future Bob Dylan manager Albert Grossman when Yarrow appeared on a PBS special about folk music. Grossman suggested they form a “folk supergroup” as a Spiritual Successor to the late 40s folk boom started by the liked of The Kingston Trio and Pete Seeger and had given way to a wave of “pop folk” in the last few years. Yarrow agreed and, after Stookey decided to go by his middle name of Paul, Peter, Paul and Mary was born.

Following hugely successful appearances in Greenwich Village, the trio's debut Self-Titled Album appeared in 1962, featuring their Breakthrough Hit, a cover of the Pete Seeger-penned “If I Had A Hammer.” Both established PP&M’s trademark style of staunchly leftist (albeit not-threatening) sociopolitical lyrics wrapped in catchy melodies and gorgeous three-part harmonies, giving them mainstream appeal without needing to sacrifice their messages. Changing political tides meant a more liberal American public who would more readily accept the group’s songs than the conservatives who dismissed their predecessors (being signed to Warner (Bros.) Records didn’t hurt either).

PP&M’s next record, '’Moving,'' featured undoubtedly the group’s most beloved song, the children’s classic “Puff the Magic Dragon.” It also established another of the group’s trademarks: covering lots and lots of Bob Dylan songs, arguably beginning the trend of Dylan’s biting social commentary finding greater success in more capable performers (read: people who’s voices didn’t sound like sandpaper on one’s ear). Their cover of “Blowin’ In The Wind” was not only a massive hit, reaching #2 on the charts, which brought Dylan into the mainstream, but embodied the zeitgeist of political activism in 1960s America to a T as the Civil Rights Movement was gaining momentum. The group would give a career-defining performance of the song at the March on Washington, immediately following Dr. Martin Luther King Jr.’s legendary “I Have A Dream” speech.

In addition to PP&M’s socially conscious lyrics, the trio were also well known for being quite the humorists, frequently poking fun at themselves and letting Stookey perform standup during concerts. When rock n’ roll began eclipsing folk in the later part of the decade, they bit back with the deeply satirical Stealth Insult track “I Dig Rock and Roll Music” (the song famously included a dig at The Mamas & the Papas, who, at the time, were accused of being a ripoff of PP&M).

The group became more directly politically active in the later part of the '60s, appearing at the White House on behalf of Senator Eugene McCarthy’s antiwar campaign (Yarrow would end up marrying McCarthy’s daughter shortly thereafter). McCarthy’s failure, which tragically, and eerily, coincided with the murders of both MLK and Robert F. Kennedy signaled the End of an Era and the group took a hiatus in 1970 after celebrating their ten-year anniversary with a Greatest Hits Album. All three would have modest solo careers, with Stookey's "Wedding Song (And There Is Love)" becoming a minor hit.

After a couple of failed reunions, the group reformed proper in the '80s, and at the best possible time: the new political climate proposed by the Ronald Reagan administration threatened to do away with the very human rights they had fought to protect for twenty years prior, and their songs were needed more than ever. The next fifteen years saw a handful of new albums, along with various all-star folk concerts, albums, and television specials, with the trio’s songs just as socially aware as ever. The act’s final studio album, In These Times, appeared in 2006 and featured a cover of Mark Wills’ country hit “Don’t Laugh At Me,” which Yarrow would later use as the basis for a successful anti-bullying campaign.

By this point, Mary Travers had been living with leukemia for two years and was performing concerts with an oxygen mask on standby. She died from complications from the illness three years later, effective ending the group permanently after a prolific 50-year career.