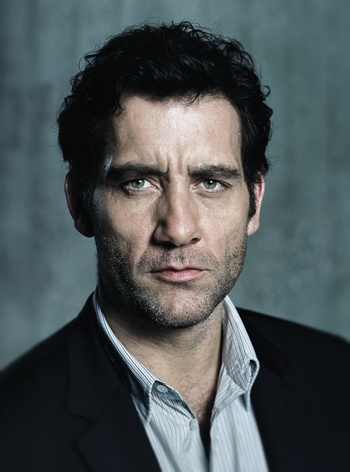 "I just like to keep challenging myself, keep it varied. It's a craft, and I'm constantly trying to learn and get better at it."
Advertisement:

Clive Owen (born 3 October 1964 in Coventry, England) is an English actor of television, stage, and film. Starting in television, his first major Hollywood role was opposite Halle Berry in The Rich Man's Wife. His breakthrough role, however, was his critically acclaimed starring turn in Mike Hodges' Croupier. Since then, he has had major roles in films as diverse as Gosford Park, The Bourne Identity, King Arthur, Closer, Sin City, Inside Man, The Confirmation, and Children of Men.

Contrary to popular belief, he surprisingly is not Clive Warren.

Owen was reportedly a popular choice to inherit the role of James Bond 007 when the Pierce Brosnan era came to an end but ultimately Daniel Craig took the mantle instead.